Usongobong, a student of Federal Government Girls’ College Ikot-Obio Itong, Akwa-Ibom, beat 11 other finalists to win the best prize at the competition, which had over 5,000 entries from students of senior secondary schools across the country.

She was announced as the winner at the grand finale of the competition and award ceremony held at Tony Elumelu Amphitheatre in UBA House, Marina, Lagos, on Monday. 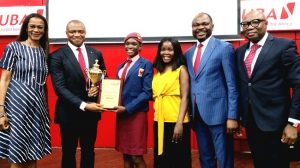 Otong, an SS2 student and fourth child of her parents, is the fourth female student to have won the star prize in four years even as only one male student made it to the final stage of this year’s edition among the top 12 finalists invited to the award ceremony.

Otong, who was accompanied to the event by her ICT teacher, Akanyere DivineLove Chigozie, said she was excited to have come tops in the competition, adding that the experience has bolstered her confidence and that the scholarship will go a long way towards assisting her dreams in becoming an ophthalmologist because it will help change her life.

According to her, it was her first attempt to participate in the competition and she had never won any major award before.

They all wrote on “ASUU strikes have often cost Nigerian students time. Advise the Nigerian government on how they can reach an agreement with ASUU to improve tertiary education in the country”.

While commending UBA Foundation for providing the platform, she said she had gained additional knowledge about contemporary issues in the education system and that hard work and commitment are certainly rewarding.

Oliver Alawuba, managing director/CEO of UBA Plc, said the bank remains vested in the youth, who are the future leaders and that UBA is particularly happy to be using the platform to boost reading culture and encourage healthy competition among students, noting that the annual event has produced so many winners with many today contributing to national development.

“As a bank we are interested in empowering our youth, and to do this, we must educate them, through efforts such as these. The truth is that we are launching these programmes in all 20 countries where UBA has a presence. Already, some of these countries have started,” he added.

He promised that the bank through the competition would continue to support the education of Nigerians who want to study in any of the African universities.

Kennedy Uzoka, chairman of the UBA Foundation, who congratulated the 12 finalists, commended everyone who was a part of the event.

“We set up this competition over 12 years ago, because we saw the need to allow students to express themselves and convey their ideas, and over the years, we have seen that we are doing something very unique and truly African. We have given scholarships to over 60 students, and we have been able to produce doctors, engineers, and lawyers through this platform,” Uzoka said.

Bola Atta, MD/CEO, UBA Foundation, who also congratulated and commended the winners for their exceptional performance, said every student who sent in an entry for the competition was a winner.

She said UBA Foundation’s National Essay Competition has been taken to other African countries, including Ghana, Senegal, Sierra Leone, and Guinea, with more African countries coming on board in 2022.

“UBA Foundation, the CSR arm of the UBA Group, is committed to the socio-economic betterment of the communities in which the bank operates, focusing on development in the areas of education, environment, economic empowerment, and special projects,” she said.