With organised labour insisting on immediate implementation of the new minimum wage law, 17 states have agreed to pay even as the federal government has advised that defaulting states should be taken to court by aggrieved workers for breach of the law. 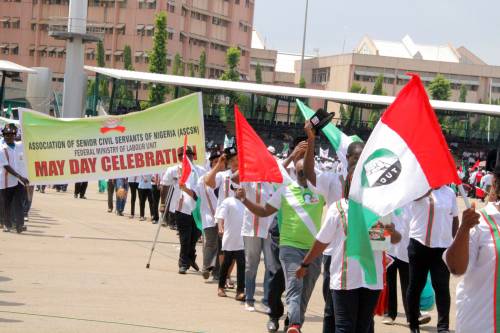 Addressing workers at this year’s Workers’ Day celebration yesterday at the Eagle Square, Abuja, Stephen Ocheni, the minister of state for labour and employment, said the federal government has shown that it cares for the welfare and well-being of Nigerian workers by hastening action on the N30,000 new minimum wage.

The minister said the new minimum wage law took effect from April 18, 2019, and that all entities, including states and local governments are to start paying immediately.

“Also, private sector employers are to do the same. We expect immediate discussions with the different Joint Negotiating Councils for consequent adjustments upstairs as a result of the movement from N18,000 to N30,000,” he said.

Ocheni further stated that the federal government had converted the tripartite committee on negotiations for new minimum wage to a standing committee, which will be responsible for setting new minimum wage after every five years.

He said having assented to the N30,000 minimum wage bill, the federal government is committed to its immediate implementation.
He added that workers now have the right to approach the Industrial Court to enforce the payment of the new minimum wage at all levels of government.
He added: “The tripartite committee on negotiations for minimum wage has transformed to a standing committee with mandate to negotiate a new minimum wage every five years.
“Trade unions are now encouraged to approach the Industrial Court on matters relating to the noncompliance with the New Minimum Wage Act for adjudication.”

The minister of state further explained that the tripartite committee is expected to commence talks on review of the present minimum wage six months to the end of the five-year-timeline.

In the state of the nation address jointly read by the NLC President, Mr. Ayuba Wabba, and his TUC counterpart, Mr. Bobboi Kaigama, the leadership of the labour movement said it expects immediate implementation of the new minimum wage of N30,000.
“We urge government to quickly finalize salary adjustment across the payroll of civil and public servants. We have already wasted a lot of time arriving at the new national minimum wage, we should not waste a single more second implementing the new national minimum wage across board. We urge workers to remain vigilant till total victory is won,” they stated.

NLC and TUC said they were not only going to push for compliance on minimum wage payment at all levels, but said henceforth the national leadership of labour will also take action against states owing salary arrears to workers to ensure that it is cleared.
The organised labour bemoaned the state of affairs in the power sector, especially the poor performance of privatised distribution companies.

Wabba, who read the first part of the speech, lamented that five years after the entities were privatised none of the set targets were achieved but said these power sector entities have continued to be a burden on the federal government, with a bailout of over N233 billion.

“It is sad that the Nigeria Electricity Regulatory Commission (NERC) appears soft on operators and hard on consumers. We call on the federal government now that the tenure of the DISCOs is due for renewal to review the entire privatization exercise and come up with the best approach to deal with this challenge,” the union said.