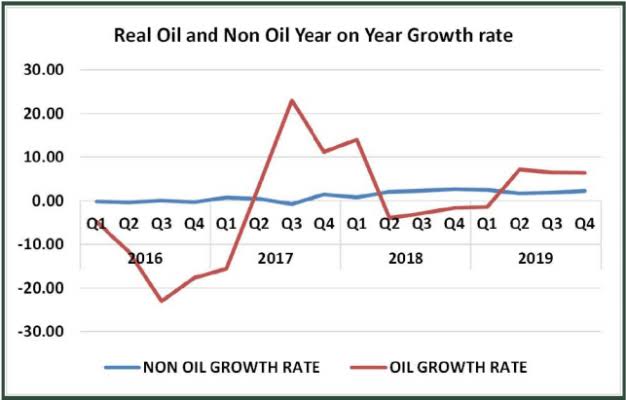 Against all odds, Nigeria’s gross domestic product (DGP) which measures expansion in the country’s economy advanced by 2.27 per cent last year.

This growth marks the highest expansion the Africa’s biggest economy has recorded in a period of four years, according to the latest data by the National Bureau of Statistics (NBS).

Since year 2016 recession when the economy plunged into the negative territory by -1.58 per cent, last year’s record of 2.27 per cent marked the highest growth compared with 0.82 per cent and 1.91 per cent growths in 2017 and 2018 respectively.

Similarly, the GDP grew by 2.55 per cent year-on-year in real terms in the fourth quarter of 2019.

“For better clarity, the Nigerian economy has been classified broadly into the oil and non-oil sectors,” the NBS has reported.

During the Q4, 2019, average daily oil production of 2.00 million barrels per day (mbpd) was recorded, indicating a rise of 0.09mbpd over the daily average production of 1.91 mbpd recorded in the same quarter of 2018.

However, it was -0.04mbpd lower than the production volume of 2.04mbpd recorded in the third quarter of 2019.

Nevertheless, it is notable that oil production remained consistently at or above 2.0mbpd all through 2019

Real growth of the oil sector was 6.36 per cent, year-on-year, in Q4 2019 indicating an increase of 7.98 per cent points relative to the rate recorded in the corresponding quarter of 2018.

On an annual basis however, report shows oil recorded 4.59 per cent growth in 2019, higher compared to 0.97 per cent recorded in the preceding year.

The oil sector contributed 7.32 per cent to total real GDP in Q4 2019, up from figures recorded in the corresponding period of 2018 but down compared to the preceding quarter, where it contributed 7.06 per cent and 9.77 per cent respectively.

The NBS also states in its report that oil contributed 8.78 per cent to real GDP in 2019.

On the flip side, the non-oil sector grew by 2.26 per cent in real terms during the reference quarter.

This sector was driven, during the fourth quarter of 2019, mainly by information and communication (telecommunications), agriculture (crop production), financial and insurance Services (financial institutions), and manufacturing.

Protectionism harmful to global economic growth, must be avoided- EU