Heritage Bank of Nigeria and Polaris Bank, both tier-3 lenders in Nigeria, have come on the radar of Nigeria’s legislators, who say the banks are sleeping on debt owed and not remitted to the federal government, and are threatening a takeover of the financial institutions by the Central Bank of Nigeria.
The threat was made by the House of Representatives’ ad hoc committee on the assessment and status of all recovered loots (immovable and movable assets) between 2002 and 2020 by government agencies for effective and efficient management.
The committee, led by Adejoro Adeogun, made the threat and also said it would issue an arrest warrant on Innocent Ike, Polaris Bank’s chief executive for the failure to appear before the panel, as well as non-remittance of over $32 million, which is more than the bridge bank’s share capital, owed to the Nigerian National Petroleum Corporation (NNPC).
The chairman seriously frowned at the non-appearance of the bank chief at the investigative hearing in Abuja, describing it as the trademark behaviour of the bank.
“If Heritage Bank owes Nigeria more than its share capital, we will not hesitate to ask the National Assembly to write to CBN to take over Heritage Bank. They cannot be owing more than their share capital, sit on it and feel too big to respond to invitations from the National Assembly. Clerk, you have to write to them, give them till Wednesday next week. That is the last time we are going to give them,” Adeogun threatened.
The matter before the committee is as old as three years ago, Polaris Bank (the defunct Skye Bank) got a lifeline from the apex bank to take over the assets and liabilities of Skye Bank, which was yet to find investors that would inject capital into the lender’s operation as intended by AMCON, the CBN and NDIC. But, it now appears that the bank may be heading into another capital related trouble as pulling out over N13 billion from its tiny reserves with the CBN could hurt its operation, and threaten its going concerns for another time.
Also, with the threat by the House committee to give a takeover authorization to CBN, panic is already in place among shareholders, board, and management of Heritage Bank.
However, the takeover may not lead to job losses and decline in customers’ deposits, experts advised on the matter to calm the panic. 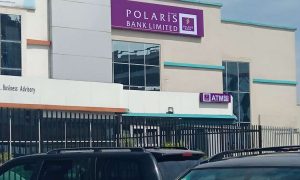 The committee has, however, issued a 7-day ultimatum to the management of the two banks, after it turned back all representatives of the banks, as well as the accountant general of the federation, saying they lacked the capacity to answer the questions from the committee.

Adeogun also condemned the attitude of the management of Polaris Bank for not honouring an out-of-court settlement with the NNPC and failing to pay up its debt owed to the government.
The state owned oil company, represented by Umar Ajiya, its chief financial officer, had said it is yet to receive payments from Polaris Bank, a position the bank countered by insisting that it has completed the debt payment of $32 million.
The committee chair, while responding to the claims of a legal officer representing Polaris Bank, who failed to identify himself, but stating that the financial institution had tendered evidence of the payment, said: “You did not tender any evidence. You wrote a letter saying you directed CBN. Directing CBN does not mean CBN has paid the money.
“You directed CBN to use your reserve and if they make that payment, your reserve will fall below regulatory requirements. So, CBN has ignored your advice and they have not paid. That money is supposed to be paid into the federation account to fund the 2022 budget. So, you have between now and Wednesday next to appear here with evidence of your payment, not an instruction to CBN because that is not acceptable. We have to make sure that you pay that $32 million to Nigerians.”
Businessamlive Website Stats