Nigeria faces the threat of environmental catastrophes on several fronts due to a range of issues, from poor government regulation to insufficient education. Nonetheless, with the help of the UN and other similar organizations, they are beginning to combat the root causes. But what issues are they facing, and how are they approaching them? 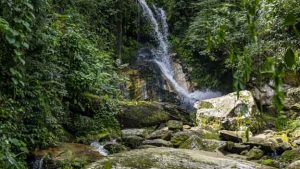 What Are Nigeria’s Environmental Challenges?

Nigeria’s environment is at risk on several fronts, including diverse environmental problems such as:

Nigeria’s overcrowded streets and unregulated factories are significant contributors to CO2 emissions in the atmosphere and toxic chemicals in the water supply.

The oil industry in the Niger Delta has provided massive wealth to the country along with huge wealth disparity. This disparity is causing multiple oil spills due to local pirates and bandits siphoning off oil to sell on the black market.

The rainforest provides a fertile ground for the development of both legal and illegal lumber industries as a result of the lax government enforcement on logging. Deforestation is a logical result of unregulated logging, which is occurring in vast swaths of Nigeria.

Desertification is one of the outcomes of deforestation, when the land that used to be covered in trees becomes desert instead.

Due to vast amounts of plastic waste and poor drainage systems, many Nigerian cities suffer from flooding that brings destruction and disease to large parts of the country.

What Is Nigeria Doing To Reduce Its Many Environmental Concerns?

As you can see, the environmental issues facing Nigeria are significant and varied. However, there are many things that they are doing in conjunction with the UN and other supranational organizations.

Due to a rapid rise in wealth from its oil industry and an exploding population, especially in urban areas, Nigeria has begun to work on new ways to develop sustainable environments. The first step in this process is educating the public on reducing the amount of single-use plastics to reduce waste.

As seen in the table from this Australian energy comparator, Nigeria produces considerable plastic waste per capita each day, and this trash then causes flooding and environmental degradation. Moreover, much of this plastic waste is burned, contributing to significant amounts of CO2 entering the atmosphere and releasing harmful toxins.

Environmental issues like deforestation are becoming more common due to the increasing demand for resources. A number of reforestation and afforestation projects have been undertaken to combat this issue.

The extent of land degradation and pollution of the environment has been assessed, and appropriate mitigation measures have been proposed. Maintaining biodiversity will be accomplished by setting up task forces to combat the degradation of biodiversity, particularly in the Niger Delta.

Poor air quality in Nigeria can be attributed to several factors. However, by taking steps such as phasing out ozone-depleting substances and enforcing stricter regulations on illegal burning, the government is taking these problems seriously.

The rapid rate of urbanization has resulted in many significant problems. For years, the government has invested heavily in programs to build affordable housing in a sustainable manner that adheres to the other measures in this post.

6.   Incorporating Development And Environment In Decision-Making

Almost all of Nigeria’s problems are attributable to poor planning and an unintegrated approach to the environment. The government hopes to emphasize how its policy decisions will affect the ecosystem by taking a more holistic approach.

If Nigeria wants to manage its environmental footprint effectively, it must first manage its natural resources. Due to integrated policy choices and realizing the importance of sustainable development, the Nigerian government is now taking a more significant role in protecting the environment.