Global forestry and logging market, according to reports by the Food and Agriculture Organisation, reached a value of nearly $535.96 billion in 2020, having increased at a compound annual growth rate (CAGR) of 0.8 per cent since 2015. The Business Research Company, an international market intelligence organisation, forecast that the market is expected to grow from $535.96 billion in 2020 to $726.51 billion in 2025 at a rate of 6.3 per cent. The growth,it explained, is mainly due to the demand for forestry and logging products especially in countries including;China, U.S,Germany,Canada, Sweden, Brazil and Russia, which is expected to drive the growth of the market. 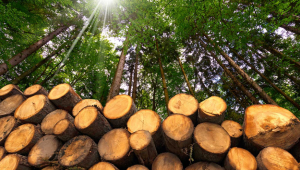 Going forward, increasing construction of wooden buildings, adoption of automated forestry management, rising demand for wooden furniture are expected to drive the market in the future, making timber one of the most sought-after woods in the world and a dominant commodity in the global forestry and logging market.
The Food and Agriculture Organization Corporate Statistical Database (FAOSTAT) ranked China as the world’s largest timber and wood products importer and with the rapid development of China’s economy, there is a growing demand for timber from industries of construction, papermaking and furniture manufacturing.
Despite the Presence of forest vegetation belt concentrated across many states such as; Bayelsa, Cross River,Delta, Edo, Ekiti, Ondo, Osun, Rivers, and Taraba, with the capacity to provide ready sources of valuable timber for the export market, Nigeria’s timber resource has in recent years, been inflicted by many drawbacks and records by the Food and Agriculture Organisation reported that between 2000 and 2005, an estimated 55.7 per cent of the country’s primary forests consisting timber were lost to illicit timber trade,unconstrained deforestation and felling of trees without a significant simultaneous replanting to boost economic sustenance. Worse still, the country’s forest cover also falls below the United Nations’ 26 per cent recommendation
Commenting on Nigeria’s timber industry, John Isemede, national expert on value chain at the United Nations Industrial Development Organization (UNIDO), Nigeria was a major producer of timber in the world market as far back as the 1960s and 1970s.
According to the erstwhile director general of the Nigerian Association of Chambers of Commerce,Industry,Mines and Agriculture (NACCIMA), the African Timber and Plywood (AT&P), a factory located in Sapele, was once reputed as one of the largest timber manufacturing complexes in the world and the largest timber producer in Africa. He however bemoaned that as a result of poor management and the country’s oil dependency, timber production for export has become a negligible venture while a large percentage of forest areas have been devastated by illegal timber harvesters.
The Nigerian Human Rights Community (NHRC), in a recent press conference titled “Illegal Wood Export in Nigeria and the Far-reaching Consequences on Economy,Human Rights and Sustainable Development in Nigeria” revealed that Nigerian forests and its resources are exploited by illegal Chinese, Lebanese and Korean loggers, spurred by the connivance of residents in some of the local communities where the forests are located.
“What we are seeing across Nigeria is a blatant rape of our environment by a combined dubious synergy of local and international conspirators. Our forest reserves, wood species and economic trees are being mauled down in desperation.As we speak, Nigeria is hub to the largest illegal exportation of illegal wood in Africa,” the group stated.
Also dwelling on the illegal logging of timber by foreigners, an investigative report published in International Centre for Investigative Reporting (ICIR), blamed the country’s poor attention to its forest commodities.
“In Nigeria, where forestry matters are handled by state governments because they own all the forestry estates in the country, logging of timber, including rosewood, is banned or allowed only under license, but traders have a free reign in the forests across the country because of poor regulations, monitoring and local corruption,” it said.
The report also disclosed that despite various laws prohibiting logging except with the possession of a license obtained from the forestry department, official channels have been often ignored while trees are freely harvested albeit illegally without any official sanction.
Faced with these challenges, analysts opine that Nigeria’s timber productivity has failed to live up to its potential in the world market and the country will continue to lose opportunities to make huge revenue from its forestry commodities and bolster its economic diversification plans.
Reviving Nigeria’s timber industry
The Nigerian Human Rights Community in its call for a solution to Nigeria’s timber challenges demanded that all foreigners and local perpetrators involved in illegal exportation of Nigerians’ precious wood resources should be sanctioned and banned while forest control policies and laws should be thoroughly enforced.
It further recommended that a presidential probe panel and judicial commission of inquiry should be set up in all the affected states to identify, punish and sanction all the foreign interests and their collaborators involved in the illegal timber business.
Orimoloye Faleyimu,Forestry Management lecturer and researcher at the Ondo State University of Science and Technology, said the practice of accepting forestry as a public venture is not ideal. He asserted that the private firms and industries that derive their raw materials from the forest should be made to pay back some of their huge profits to forest regeneration programmes. He also recommended that 25 per cent of the gross profit should be backwardly integrated towards forest regeneration or re-afforestation.
Faleyimu also pointed out that reforming laws and regulations will have limited impact unless one also reforms the institutions in charge of implementing them. These institutions, he said, must have to become more efficient, outcome oriented, less corrupt and more transparent for any meaningful development to take place.
John Isemede suggested that increased planting of trees/afforestation should be made a legacy investment in which the present generation can plant trees to sustain the next generation. He added that timber is a major commodity in the global market whose value increases with time and should be prioritised as an avenue to bolster Nigeria’s economic diversification within the agricultural value chain via timber farming/afforestation.