Abia State Governor Okezie Ikpeazu has assured traders of Ariaria International and Ngwa Road markets of the determination of his administration to remodel the markets to meet international standards. 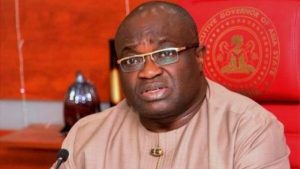 Ikpeazu stated this in Aba, the commercial hub of the state, while interacting with the executives and some major stakeholders in the two major markets.

Ikpeazu stated that the interface with the traders would be frequent in order to ensure that the government carried the traders along in the scheme of things. He said the government was desirous of making sure that the traders return to their shops and do their businesses under a safer and more conducive environment, which was why it began the remodelling of the markets in phases.

The governor, who was represented by John Okiyi-Kalu, the state’s commissioner for Trade and Investment, assured that no new shop owners would get a shop allocation until the original shop owners get their shops when allocation of shops begins in the two major markets.

On the flooding of the project area in Ariaria International Market, he disclosed that he has awarded a contract to channel storm water from the area through Omuma Road, which is currently under reconstruction with rigid pavement technology, adding that he has taken further steps to ensure that double taxation was addressed as well in all the markets.

Ikpeazu, who charged the traders to ensure that they continued to sustain the peace in the markets, warned against sabotaging efforts of the state government.

He appealed to the traders displaced as result of the ongoing remodelling efforts to exercise patience with the slow pace of work in the markets, which he attributed to the effect of the rainy season and promised speedy pace of work, as soon as the dry season sets in.

He informed that the government acted deliberately in providing alternative shops for the displaced traders within their market, because of the premium it places on the welfare of traders and Abians in general.

Some of the traders who had earlier spoken at the event expressed concern over losing their shops, excessive taxation of the traders by the Abia State Board of Internal Revenue (ABIR), flooding of construction areas, and the slow pace of work by the contractors.