Muda Yusuf, the director-general, Lagos Chamber of Commerce, (LCCI),, has called on the federal government to address the root cause of rice smuggling, rather than the border closure policy of the government which he said is not a sustainable solution. 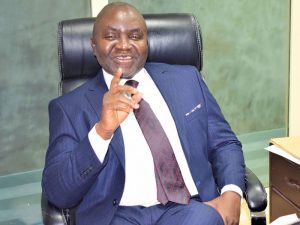 He explained that there was need for government to address challenges as the domestic capacity to produce competitively in quality and price, infrastructure and connectivity in moving the product from one part of the country to another and others.

Yusuf disclosed this yesterday in Lagos during the 2019 Business Forum Between Nigeria and South Korea organised by Korea Trade-Investment Promotion Agency, with the theme: ‘Sustainable Business for Economic Development’

He further urged the government to bring in technology into agriculture and encourage more commercial farming, while building domestic capacity in rice production.

He added that government should change tariffs, stating that domestic import tariffs are too high.

“How can you have tariffs of 30-70 per cent even for intermediate products? Our ports are in a very bad shape.”

Continuing, Yusuf said: “We have to deal with fundamental issues otherwise you make the citizens to suffer unnecessarily. We need to create infrastructure for agriculture to support the population, and instead of closing the border, which is creating more poverty. Let’s address the insecurity situations across our border. You cannot say institutions have failed and get citizens to pay the price of those institutions. We have a lot of legitimate exporters who exports products to the West African sub regions, their businesses are down and people are suffering.”

A lot of imports that come to the sub region come first to Nigeria and from here the imports are distributed to other countries and all that have stopped. We have people trading their products on the ETLS (products registered to be traded in the sub region) the closure of the border has stopped trading activities in the ETLS. Of course there are some benefits, but we need to count the costs.

“The gap analysis between domestic production and domestic consumption for rice is between 2.5 to 3million metric tonnes annually, so how do you feed those persons? The price of local rice is expensive and the quality is not good and we have not sufficiently supported those capacities.”

Earlier in his remarks, the Consul General Embassy of the Republic of Korea, Mr. Kim In-Taek, said Nigeria is the second-biggest trading partner-country in Africa to South Korea and the biggest construction market in Africa, adding that the potential economic coalition of these two countries is limitless.

In-Taek expressed the hope that more Korean companies would be more interested in the Nigerian market and facilitate more trades through the business forum, noting that the increased trade and stronger economic cooperation would enhance the relationship between both countries, “which would be beneficial to all of us.”

In his remarks, the general director of Korea Trade-Investment Promotion Agency (Kotra) Lagos, Mr. Bohyun Pyun, said the bilateral relationship between Nigeria and South Korea began since Nigeria gained independence and has seen the import and export volume increasing over the years in consumer products such as petrochemicals products, oil and gas, home appliances and others.

He remarked that looking at the trade volume overtime between both countries; “this has been increasing over the years which has reached $984.871 million at August, 2019.”

Pyun added: “Besides being a part of Nigeria trade economy, South Korea wants to play a major part in Nigeria financial, social and cultural sector which expl