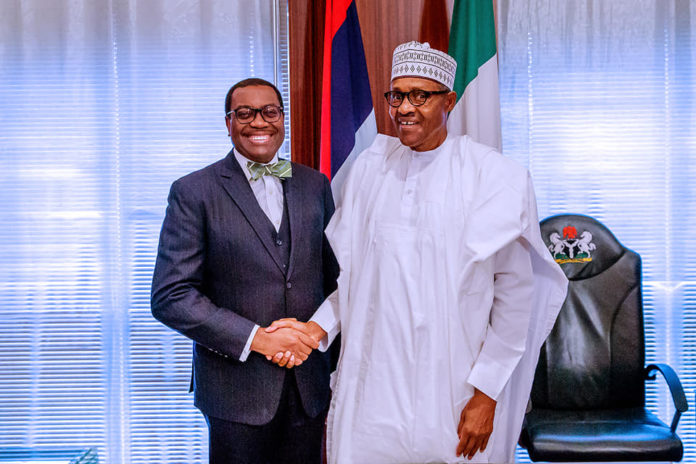 President Muhammadu Buhari is savouring the victory and clearance of Akinwunmi Adesina, president of the Africa Development, by the independent review panel which looked into allegations of corruption against Adesina.

The president has congratulated Adesinajust as he celebrated the victory along with millions of Nigerians.
Buhari’s congratulatory message was contained in a statement by Femi Adesina, his special adviser on media and publicity

According to the letter, “President Muhammadu Buhari warmly rejoices with President of the African Development Bank, Dr Akinwunmi Adesina, on the clearing of all allegations against him by an anonymous group, and further validation of his competence and integrity to lead the institution.

“President Buhari congratulates AfDB Board of Directors, the Ethics Committee and members of staff for their courage, maturity and patience in following through the process of investigations, and acceptance of Report of Panel of High-Level Independent Experts, which reviewed the Report of Ethics Committee of AfDB, and Dr Adesina’s response.

“The President commends the eminent personalities, consisting of Mary Robinson, Justice Hassan B. Jallow and Leonard F. McCarthy, who handled the review of the report of the Ethics Committee, and their professionalism in rejecting support services, and providing a unanimous report.

“President Buhari believes the conclusion of the review should finally draw a curtain on the allegations that created distractions for the entire institution for a period, and serve as impetus for more diligence in handling responsibilities while fuelling the zeal to deliver on the promises of a greater Africa.

“The President urges Dr Adesina to remain steadfast, dedicated and resolute in pursuing his noble goals for the institution, especially with the now expected second term in office, assuring him of the prayers and support of Nigerians.”