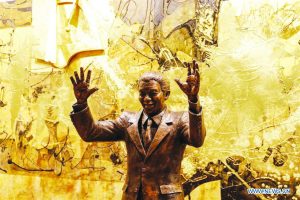 he unveiling of Nelson Mandela’s statue on Monday at the United Nations headquarters in New York was historic. Coming as part of the decision of the United Nations (UN) in declaring 2019 to 2028 as the “Nelson Mandela Decade of Peace,” the recognition of Mandela’s dedication to the service of humanity and the promotion of peace throughout the world was symbolic, for the South Africans in particular and for Africa in general. It was a moment of glory for Cyril Ramaphosa, the South African president as he unveiled the statue ahead of the Nelson Mandela Peace Summit.

That the much-sought-after virtues and attributes that the UN has been struggling hard to promote  found eloquent expression in the late sage and leader who emanated from Africa, is a great cause for optimism and hope that Africa’s story is not only about wars, famine, economic crisis, bad government or social dislocation. It was gladdening, gratifying and refreshing enough that Mandela, albeit posthumously, got the global recognition for his lifetime of sacrifice, service and good leadership. The story of Mandela is out there for all. But was most remarkable about the UN’s special recognition and the dedication of the Peace Summit and decade ahead to Mandela was the message that the global body intends to send to leaders all over the world, which Mandela embodied during his lifetime.

Is it a paradox that the same Africa that has been enmeshed in leadership crisis in the past half a century is now becoming a beacon of hope for the whole world? Is Africa ultimately beginning to occupy the right ecological niche in the global jungle of politics, trade and technological advancement? Should we all roll out the drums and begin to celebrate a watershed in the affairs of Africa on the global stage? What if Mandela was not freed from prison? What if he was killed in prison? What if he never had the chance of becoming a South African president in his lifetime? What if he never had the chance of actualising the ideals he stood for? A millions of what ifs?  What would South Africa look like today? How would the government of South Africa have run in its post-apartheid years? Implicit in Mandela was the decision to let go of the past and aim for nobler ideals. New leaders in Africa can now stand upon his shoulders and establish a “new high” in leadership qualities.

Could it be right to say that Africa has many Mandelas that never had the opportunity to bring their leadership qualities to bear? Considering the wasted post-independent decades of wars, coups and counter coups, unstable economies and relegation to aid dependence, wouldn’t it be right to say that Africa’s problems of poverty, poor health, low life expectancies, food insecurity and social unrest are all a result of poor leadership? From Somali to Liberia, from Sierra Leone to Libya, the imprints of bad leaderships over the years are all too visible. Clannish, paranoid and mediocre leaders have plunged various countries within the continent into unending chaos. Millions of Africans have had to pay with their lives for the misrules of a few despots, power hungry and clueless leaders who put the future of their countrymen and women at stake in their quest for self-perpetuation in power.

Many leaders who came on board on popular acclaim subsequently lost focus, direction and purpose over time and turned against the led, the people and the cause they earlier advanced. Joseph Mobutu (who later transformed to Mobutu Sese Seko), Haile Selasie, Blaise Campaore, Houphet Boigny, Hissen Habre, Paul Biya, Maomar Ghadafi, Yahya Jammeh,  Sani Abacha,  Robert Mugabe and Yoweri Museveni are a few among many who got different ideas about leadership positions and would rather remain in power until death do them part. While some, like Cameroon’s Biya, still hold on to power at an advanced age, it took a popular uprising to upstage the Zimbabwe’s strongman only recently. And, should these people expect to be in the good books of history, to eat their cake and still have it intact? The liberation struggles that brought Kenneth Kaunda to office dissipated years after he gained power. The reforms many of them promised lost steam as soon as they gained power. They become the phenomenon and object of attention instead of focusing on the good of the people they purport to lead. Louis XIV of France supposedly said l’état, c’est moi, during his rule, meaning that “I am the state.” Abdelaziz Bouteflika, an Algerian politician who has been the fifth President of Algeria since 1999, is still not ready to let go of power at 81 years.

Maj. General Siad Barre, a former policeman and an army general, who turned upside down the fortune of Somalia since his assumption of power through a coup d’etat in the 1970s, became a brutal dictator whose regime fostered conditions leading to the 1991 civil war, from which Somalia is yet to recover today. His was a country that turned out about the largest number of refugees (to Kenya and elsewhere in East Africa) since the war broke out. Anwar Sadat, his predecessor in office and his successor Mubarak all had their parts to play in bringing Egypt down the road to near collapse. Taking Africa’s development challenges in isolation in any analysis would therefore be an injustice and incomplete task without properly linking it with the leadership failures of the past and present.

Any pundit would have been forgiven to predict that South Africa’s economy, polity and social life would take a plunge or be in shambles immediately after the fall of apartheid. Considering the decades of brutal, hostile and discriminatory apartheid regime, it would have been right to expect that black leadership in South Africa would have led to a ferment of constitutional crisis and social unrests.  The fears of the minority white, now out of the centre of power, about reprisals would have been confirmed. A  determination to extract a pound of flesh from his tormentors, for the 27 years of imprisonment would have been justified by some had he decided on that trajectory, notwithstanding its inappropriateness. It then means we would have been dealing with a different kind of reality today in South Africa.

But Mandela left no one in doubt that vendetta was not in his agenda. He neither preached revenge, nor did he encourage it. He was unequivocal on the principles of forgiveness and peaceful co-existence, and he proclaimed these in his words and actions. Let us pause for a moment to imagine how these must have impacted on the stock market, foreign direct investment, tourism visits, hotel and hospitality industry homeland security and many other crucial sectors of South African economy and social life. No doubt some local politicians would have branded Mandela as weak and lily-livered for his benign disposition towards their former oppressors. But the realities that followed are what we see today in Africa.

For over a decade after the majority black rule under Mandela, South African economy remained the largest in Africa. The Gross Domestic Product (GDP) in South Africa was worth $349.42 billion in 2017, compared to Africa’s nominal GDP of $3.52 trillion in 2017.  The country sustained its position as the continent’s financial, ICT and knowledge hub, which it still retains. Nothing can be more rewarding! This is not to say that Mandela had no detractors in-country, within the ruling ANC party, or that many weren’t locally opposed to his policies and styles. But his ideals gave the country a new status: from a pariah under apartheid rule to a paradise of sorts post-independence. And, for the years in office, he was a low profile president, unlike those that manifest opulence with public funds. His dressing was simple. His mien was calm. He was highly cerebral and was able to rally a diverse population of South Africans under the same leadership. What is more telling: the flag, which shows that a country with many races, tribes and religions could be a home to all, in peaceful coexistence?

Mandela would later voluntarily relinquish power even when constitutionally entitled to a second term in office. And so he won the heart of the global community, as he remained a statesman and a source of inspiration to many outside Africa, even in retirement. Mandela who, in life and in death, has been acknowledged as a global leader, continued to underscore the essence of what nations need. The recognition of his life, dedicated to struggle for the liberation of his people, the peaceful transition from apartheid rule to a majority rule under his leadership and later to a successor government without any acrimony are attributes worth emulating for other leaders who want history to be kind to them. The acknowledgement of Mandela by the UN and the dedication of the decade ahead to him should therefore send strong messages to those who have the privilege of leadership positions, in or out of government.

Let other national leaders in contemporary times from Africa learn from these qualities of Mandela. The UN, by choice of person and theme, has thought it fitting and proper to honour Mandela and present him as an epitome of peace. Let these messages resonate in Africa and beyond as we enter into the Decade of Peace ahead.