Herbert Wigwe, group managing director and chief executive officer of Access Bank, has been named African Banker of the Year at the 2021 African Banker awards.
It is the second year in a row the Access Bank group CEO  would be winning the award, having been named winner in 2020. 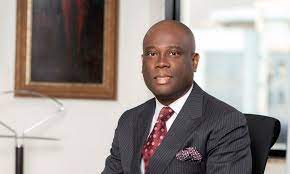 Wigwe clinched the prestigious award ahead of a crack short list of other distinguished African bank CEOs which included Ade Adeyemi of Ecobank and Kennedy Uzoka of United Bank for Africa (UBA).
The award comes just days after Access Bank completed the acquisition of South Africa’s Grobank leading to the establishment of a full subsidiary in that country and making the largest Nigerian lender, one of the largest retail banks in Africa with over 40 million customers following the implementation of a rapid growth strategy over the last decade.
Organisers of the award explained that for the African Banker of the Year award, judges look at how the nominated banking institutions’ chief executive officers and managing directors change the banking landscape through the offering of top-notched and sophisticated services to grow customer deposits and the gross loan book.
The African Banker 2021 awards were held virtually during the annual meetings of the African Development Bank, high patron of the event. The award has become the most respected and recognised industry event celebrating African banking achievements.
Others who were shortlisted for the category, African Banker of the Year, include Admassu Tadesse of Trade and Development Bank; Brehima Amadou Haidara of Banque de Développement du Mali (the Development Bank of Mali); James Mwangi of Equity Group Holdings Plc; and João Figueiredo of the MozaBanco among other nominees.
Also, Mohammed Benchaâboun, Morocco’s Minister of Economy and Finance, won Finance Minister of the Year for the exceptional work which his ministry coordinated with an exemplary response to the economic impact from the crisis and also helping to protect both lives and livelihoods.
On the same night, Nigeria’s FBNQuest Merchant Bank emerged as the winner of the equity deal of the year on the back of its role in the privatisation of Afam Power Plc and Afam Three Fast Power Ltd, while Ecobank was named the African SME Bank of the year.
The event, which was sponsored by the African Guarantee Fund, Bank of Industry (Nigeria), Banque du Développement du Mali and technology partner TagPay, also recognised Lesetja Kganyago, governor, Reserve Bank of South Africa, as Central Bank Governor of the Year. Under his leadership, the Reserve Bank has managed to act decisively, in a measured way, managing both upside and downside risk, the judges noted.

Charlie Robertson, chief economist, Renaissance Capital, won the African Banker icon category. In his remarks he noted that it was important to drive up savings rates to help spur greater investments on the continent, if Africa is to replicate the Asian miracle.
Felix Bikpo earned the Life Achievement Award for his long and distinguished career. When asked for his outlook on the future of the continent, he remained upbeat saying technological developments and also the human capabilities that we have developed in Africa are cause for optimism.
Omar Ben Yedder, group p[ublisher of African Banker magazine, speaking at the event, said: “I was really impressed by the entries this year. It showed that the banking sector is healthy and resilient which will be critical if it is to support the economic recovery post-COVID. What will be fundamental to our recovery is the support of the real economy, especially SMEs, and also a focus on more equity investments and investments in general. For that, as our African Banker icon suggested, we will also need to increase our savings rate across the continent.
“If I had one comment on the winners, it was dominated by men this year. However, I should add that the institutions that were recognised in our ceremony all had strong gender programmes, both in terms of supporting women-led businesses but also strong programmes to promote women and have women leaders within their organisations,” Yedder said.
Other winners at the 2021 African Banker Awards include: Commercial International Bank (CIB) Egypt for Sustainable bank of the year;  Nedbank, Standard Chartered and TDB for the Infrastructure deal of the year on the Tanzania Standard Gauge Railway $1.46 billion loan facility. The deal of the year in the Equity category saw Nigeria’s FBNQuest Merchant Bank emerged as winner on the privatisation of Afam Power Plc and Afam Three Fast Power Ltd; while on the Debt category saw  MUFG Bank, Mitsubishi UFJ Financial Group clinching the award on African Export-Import Bank, COVID-19 Support Facility.
The African Bank of the Year was awarded to the Standard Bank Group; Ecobank as the African SME Bank of the year award; the award for financial inclusion in Africa went to Trust Merchant Bank, DRC; African Export-Import Bank (Afreximbank) led the pecking order in the category of agriculture deal of the year on the $400 million Revolving Trade Finance Facility in favour of ETC Group; the most innovative financial institution was the Bank of Industry, Government Enterprise Empowerment Programme; Energy deal of the year was Nkhotakota Solar Power Plant in Malawi / 7.5 MW Solar PV Power Plant in Burundi and facilitated by the African Trade Insurance Agency (ATI). furthermore, ABSA emerged as Investment bank of the year winner; while the best regional banks in Africa were: Attijariwafa Bank, Morocco for the North, Banque de Développement du Mali for the West, Equity Bank, Kenya for the East, BGFI, Gabon for the African Central and Mozabanco, Mozambique Banks from the Southern region of the continent.
Businessamlive Website Stats