With the launch of the ‘African Trade Report 2020’ by the African Export-Import Bank (Afreximbank), it has emerged that despite reasonable African economic growth last year, the volume of trade among African countries has not grown. It actually fell by 0.13 percent from $1,059 billion in 2018 to $1,049 billion last year. With this, the promoters of AfCFTA (African Continental Free Trade Area) have got their work cut out for them. 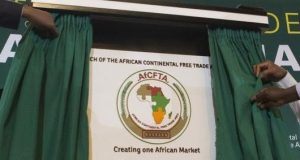 The small reduction has to be set against the context of a 2.89 per cent decrease in global trade, on the back of the trade wars and tariff increases that characterised the international trade landscape last year. It is believed that Africa’s better performance was largely the result of economic reforms, some economic diversification and increased South-South trade, which reduced the continent’s reliance on its traditional export markets.

It states that though the global trade situation has obviously been severely shaken by the pandemic, the trends, opportunities and challenges of 2019 will still be apparent this year and beyond.

The report reveals that Africa remains on the sidelines of global trade, accounting for only 2.8 percent of official total trade flows last year worth $37.7 trillion down from $38.8 trillion in 2018. Tighter international economic integration has resulted in a strong correlation between global economic growth and rising trade volumes.

However, the trade war between the United States and China affected economies across the world. This triggered big falls in share prices at the end of 2018, but most financial markets recovered from these falls during the course of last year, the report noted, adding that it was a mixed effect in Africa – some of its exchanges ended up – while others, like the Nigerian Stock Exchange (NGSE), were south.

Over the past three years, the Africa’s share of global trade had stagnated at about 2.7%. “In this regard, it is critical to ensure that practical measures, including incentives and investment aimed at improving trade-related intra-African infrastructure and logistics, as well as increasing processing and manufacturing capacity are implemented to broaden the sources of growth, and shift the patterns of African trade,” the Afreximbank report advised.

Afreximbank is the key promoter of AfCFTA. It believes that the measures will be especially important during the implementation of the AfCFTA.

The AfCFTA aims to develop regional value chains and accelerate Africa’s integration into a global economy that is dominated by manufactured products. The Agreement seeks to eliminate tariffs on 97 percent of goods traded within Africa, while also eroding non-tariff barriers to trade and easing customs operations, with the aim of boosting the volume of intra-African trade and promoting industrialisation.

Meanwhile, intra-African trade is severely limited, accounting for 14.4 percent of total African trade in 2019. This contrasts sharply with intra-continental trade elsewhere in the world, which reached 73 percent in Europe and 52 percent in Asia last year. Intra-African trade was worth just $147.8 billion last year, down from $156 billion in 2018. This shows a difference of $8.2 billion or 5.25 per cent. At the same time, the continent’s merchandise imports fell three percent last year to $543.22 billion, as a result of challenges in accessing trade finance, liquidity constraints, exchange rate risks, falling foreign exchange reserves and the depreciation of some local currencies.

The direct corollary from the above shows that Africa is overly an import-dependent continent. At the same time, with 1.3 billion people, the continent is exporter of agricultural raw materials and commodities.

An Afreximbank’s AACI, a trade-weighted composite index, has been designed to track the price performance of 13 different commodities exported by African producers: crude oil, gold, cobalt, aluminium, copper, zinc, cocoa, coffee, cotton, sugar, wheat, corn and palm oil. A fall in the average price of any of these commodities usually sends shockwaves to economies of the commodity-reliant African countries. Example is crude oil, which price fall from $71.7 a barrel in 2018 to $64.2 a barrel last year, had a big impact on African exports.

Oil is by far the most important African export, generating 37 percent of the continent’s export revenues. Other commodities also received price pressure last year. Fluctuating prices and terms of trade make it difficult for private sector companies and policymakers to consistently monitor trends in key commodity markets, it was observed.

However, the decline in oil revenues appears to have been the biggest factor in Africa’s falling imports, with the imports of net oil exporters declining by 12.23 percent, including a huge 33.45 percent fall in Algeria. This curtailed the ability of oil producing states to finance imports.