MALDIVES, A SMALL ISLAND STATE in South Asia with a population of well over half a million people, is at risk. The country, spread over a thousand islands and famed for its aquatic life, luxurious beaches and breath-taking seascape such that it can sometimes be difficult to know where the azure sky meets the clear blue sea, is a destination for underwater divers, explorers for fun, pleasure and knowledge. The mild currents, pristine shores, clear blue waters and vibrant corals give the beaches distinctive sights in the day while the bluish lights emitted in the night as a result of bioluminescence from planktons at the famous Glowing Beach, distinguish Maldives’ resorts from most others in the world.  The country runs on an economy that is predominantly tourism-based. 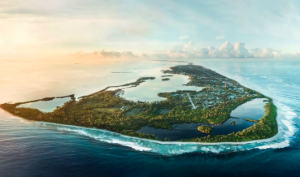 In a narrow sense, tourism has been driving the rapid growth in recent years, providing for more than 28 percent of GDP and 60 percent of foreign exchange. In a broader sense, however, tourism and related services directly contribute to 40 percent of the economy, 80 percent of exports and half of total revenues. Maldives, in 2020, got a ‘Safe Travels Stamp’ from the World Travel and Tourism Council (WTTC) for its implementation of enhanced health and safety measures, particularly in the aftermath of the COVID-19 pandemic. All of this and other sectors contributing relatively less to the GDP are presently endangered. Maldives – described as the lowest-lying country on the planet – is at the forefront of the climate crisis and one of those more susceptible to rising sea levels and coral reef damage, with a grim prospect of disappearing entirely by the end of the century.
For its tourism potential, Maldives continues to attract investments and loans from local and foreign sources. Loans and investments particularly from foreign sources going into Maldives might be turning riskier in the future under the unfolding climate challenges as the country sinks deeper into the ocean drowning the key infrastructure under the water.  Because of the growth in the tourism sector, foreign money has been pouring into Maldives broadly in physical and social infrastructure development in the areas of tourism real-estate, including integrated tourism development projects, holiday homes and private islands, hotels and hotel franchising, as well as air transportation. These have reportedly culminated in a reduction in poverty. In the near term, Maldives has reasons to be optimistic, particularly based on recent events. Notably, Maldives received over 1.3 million tourists in 2021, an improvement in the growth of tourists’ arrivals since July 2020 when the country was re-opened to visitors after the COVID-19 restrictions. In 2020, as part of its broader efforts to create quality jobs, and work for a sustainable future, the International Finance Corporation (IFC) made a $175 million investment in John Keells Holding (JKH), with a proportion of the proceeds set to boost the supply of green hotels in Maldives to meet expected future demand. Following the COVID-19 outbreak, the IFC also reportedly committed a $50 investment to Bank of Maldives – the country’s largest bank – to support the working capital needs of small and medium sized businesses in the tourism and related sectors to help preserve jobs and combat the negative shocks of the pandemic on the economy.
Maldives is on a serious adaptation drive in response to the environment. The changing climate and its effects on the sea level is threatening the very core of Maldives’ economy. Its lowest altitude makes its islands more susceptible to rising sea levels, coral reef damage, erosion of the shorelines, flooding within the islands and other effects from climate change. Many tourist resorts have, therefore, improved upon their environmental initiatives. Nationwide initiatives introduced include the elimination of single-use plastic and diesel-powered electricity, emphasis on coral regrowth programmes and educational snorkelling or scuba diving safaris with the aid of trained marine biologists. The largely rural population in Maldives are endangered as their livelihoods are threatened by climate change. Farmers near the shores are under an obligation to move their farms that are near the shore areas further inland to combat such coastal erosion. In the inner areas that turn marshy or swampy during the rains, the emphasis of many farmers is on the dry season when they use shade nets to cover the crops, especially the scotch bonnet chillies, cucumbers and pumpkins. As the country strives to adapt to climate change, the Maldivian authorities have been among those prominent in international political advocacy to embark on climate action, particularly mitigation. In 2016, heavy rainfall caused flooding at the Maldives’ main airport in the capital city of Malé, with attendant sewer overflows, leading to a $800 million plan to upgrade and renovate the airport, half of which was secured through Chinese EXIM bank loans. The government of Maldives is investing in the construction of walls around the capital city Malé as part of the measures for fending off the threats of climate change.
The government is also refurbishing local infrastructure, particularly ports, as part of its adaptation strategies. The foreboding of possible loss of land has possibly prompted a large-scale land reclamation project in Hulhumalé in the late 1990s, and the proposal to build 5000 floating homes near Malé, partly in preparation for relocation from elsewhere in the country. Beyond that, the fear of becoming climate refugees remained real and has also triggered the decision about purchasing new land in India, Sri Lanka, and Australia upon concerns about global warming, as much of the Maldives islands become inundated by the rising sea level. A country under pressure to spend as much as 30 percent of its annual income on climate adaptation, Maldives is heavily indebted. Millions of dollars spent on infrastructure – particularly relating to tourism development – might go into waste with the worsening state of climate and its effect on the country as climate bears down its impact on the country.  The loss of the natural features of the beaches and the rising sea level threatening the land might ultimately ruin lives, economy and end the nation known as Maldives. Its external debt profile is rising annually. It rose by 54.36 percent from 2017 to $2,339,711,918 in 2018, followed by 14.51 percent increase to $2,679,184,643 for 2019 and by a 25.1 percent increase from 2019 to $3,351,712,548 in 2020. Fears remain that Maldives might continue to be indebted, particularly with the challenges of the rising ocean level and submergence of their land.

The existential threats faced by the small island states – which are mostly developing, with small economies – are hardly the central themes of climate conferences. Yet, their experiences provide a whole lot of lessons for bigger countries.  In 2021, the World Bank disclosed that Maldives has a target to reach net-zero emissions by the year 2030 with international support. But Maldives took a step 11 years earlier in 2010 towards a goal of becoming the first “carbon neutral” nation by 2020, a goal missed, which must have necessitated the subsequent shifting of the goal post to 2030 in its relentless efforts toward carbon neutrality. Maldives’ earlier strategic plan on a carbon neutral policy, envisaged a switch from fossil fuel to renewable energy by 2020 with planned 50 percent reduction in electricity generation by fuel by 2015, meaning that the country thought well ahead of Paris Climate conference where nationally determined contributions were adopted in 2015. The failure of Maldives to move as fast as it earlier planned could be understood in the context of its peculiar nature as one made up of small-sized islands with large geographic distribution and one with no conventional energy resources. But according to the words of one its leaders, President Mohamed Nasheed, “if those with the least (pollution) start doing the most, what excuse can the rich have for continuing inaction?” It is clearly debatable if bigger countries can replicate exactly what appears possible in those small islands. Their models, however, need closer attention and possible adoptions, except perhaps factors of politics and other forms of sentiments could stand in the way, especially when the actors don’t feel the impact of climate change, the same way as the small islands see it.
As this year’s UN Climate Conference of Parties shifts to Africa, it is hoped that issues pertaining to African small island states will be on the front burner. Africa has a number of them, such as Cabo Verde, Comoros, Guinea Bissau, Mauritius, Saõ Tome and Principe and the Seychelles. If supported to have higher levels of development as well as policies and better mechanisms to address climate change, they are expected to be well placed to serve as examples for the continent. Fernado Po islands in Equatorial Guinea share similar peculiarities and problems with other small island states, including similar sustainable development challenges. Mauritius, for example, is particularly vulnerable to – and suffering from the devastating impacts or – the adverse effects of climate change, especially in the coastal zone, where a convergence of roaring sea level rise, and increasing frequency and intensity of tropical cyclones tend to predispose the country to considerable economic loss, humanitarian stresses, and environmental degradation.
The Small Island Developing States (SIDS) in Africa share similar experiences. Report from a recent study by the UN Food and Agriculture Organisation (FAO) highlighted frightening experiences of these SIDS. The report noted that high tides, flooding and storms are a worry for all of them, citing the storm in Seychelles, which took over 1000 of their endemic palms. It emphasised that flooding has affected agricultural land in Cabo Verde, Guinea Bissau and Seychelles, directly jeopardising their livelihoods in the past decade, particularly, of 58 percent of people in Guinea-Bissau who make their living from agriculture. All the 58 SIDS worldwide combined produce just one percent of carbon dioxide emissions, yet they suffer a disproportionate impact of the climate crisis that is not a problem of their making. According to the FAO’s report: “The African SIDS already face so many challenges without climate change and they need as many weapons in their armoury as possible for the fight against it. Agriculture must be climate-smart, or family livelihoods and health are going to suffer.”
Like in many other parts of the world and elsewhere in Africa, the West African coastline is under the threat of climate change as sea level rises. The stretch between Mauritania and Nigeria is predicted to experience rates of sea-level rise considerably above the global average in the future. A lot of livelihood opportunities and investments could be lost to the threat. Tourism is the first casualty. That is taking a hit as many beachfronts are becoming gradually wiped out with the coastline being washed away. Fishing communities are threatened by erosion and tidal surges, forcing many to lose their livelihoods as they flee the inland because of the sea’s encroachment. The cost of such an encroachment on urban communities is mostly concerning. Lagos, Africa’s most populous city, now proving to be flood prone and vulnerable to rising seas, may soon be unlivable, according to experts’ warning, particularly heralded by the eroding coastline. Billions of dollars in real estate and infrastructure investments may go down under water if the threat comes true. The shoreline protection project entailing the construction of stone barrier may offer some respite, but not necessarily a permanent protection as rising sea water seeks its own level. The sand filling and artificial extension of the shore as well as the establishment of property development projects on the sand-filled extension may not help matters for long as the sea level continues to rise. Buildings erected on the sand-filled extension risk being abandoned as the rising sea encroaches in the future. The threat to Lagos should be taken as a clarion call for all African coastal cities to begin to consider long term future climate adaptation plans, including movement away from the sea shore. Will threats like those of sea encroachment on Africa’s SIDS and continental Africa’s shoreline encroachment be mentioned for discussions at Egypt during the COP27? This is Africa’s opportunity to make its strong case and follow it up with definite action to protect the mainland continent, as well as the small island countries that are part of it. This opportunity must not be allowed to slip away.
Businessamlive Website Stats