Bread, a house-hold commodity in Nigeria, has gone beyond the reach of the majority of Nigerians due to the high cost of flour, mostly made from wheat. 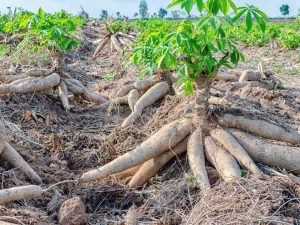 Wheat is imported mostly from Eastern Europe and so has no stable price. The current war between Russia and Ukraine has made it more difficult for flour millers to get the commodity, which is their main raw material.

As a result Nigerians are paying through their noses for bread, which used to be one of the most common foods in homes.

Flour millers in Nigeria prefer wheat to cassava, which Nigeria has comparative advantage.

Emma Nwaohia, chairman, Aba Chapter of Master Bakers Association, explained that flour millers in 2020 increased the price of flour five times, between March and August, which was further increased this year (2022).

He stated that flour millers do not consult them before they increase the price of flour, as they only react to market forces.

“As long as the dollar is increasing, the price of wheat must increase. For us, the end users, we are handicapped, because we are serving the masses,” Nwaohia said.

On the call for the use of cassava flour as a substitute for wheat, the master baker said, “We have all tried it, but it is not working. The equipment for that mechanism is not available. And the government cannot give every bakery the equipment.”

He noted that former President Olusegun Obasanjo saw this coming and ordered flour millers to add 10 percent cassava flour in their products with the hope that over the years that the country should be able to increase that percentage of cassava flour to the level that it might not need to import much quantities of wheat.

He observed that if that policy was followed through that Nigeria would now have been smiling over this problem.

He argued that the government revisiting that policy and implementing it is the only solution, and called on the government to encourage farmers to invest in wheat farming.

He urged the government at all levels to be serious with all  agricultural intervention programmes.

Recall that the federal government under former President Olusegun Obasanjo, sent a bill on cassava flour inclusion in bread to the national assembly, which was rejected.

The rejection of the bill by the national assembly, was traced to the fight back by the millers.

In fact, the former  minister of agriculture, Akinwumi Adesina, while refuting  the  claims that  a bill on 40 percent cassava inclusion in bread production was sent to the National Assembly, at the time said that the flour mills and their surrogates are doing all they can to misinform Nigerians so as to protect the super normal profits they syphon out of Nigeria.

The information that  cassava consumption was bad for patients suffering from diabetes is one of the misguided information being passed around by the millers  so as to truncate the  government policy of including cassava in wheat flour.

He said that the statement  is  scientifically baseless and maintained that “cassava flour has low glycemic indices of 59.34 percent compared to wheat flour having 70.10 percent.”

He continued: “The statement credited to some people that cassava consumption is not good for those with diabetes is wholesomely untrue, scientifically baseless and is a deliberate attempt to misinform Nigerians.

Quoting Ignatius Onimawo, a professor, he said: “cassava  flour does not increase the glycemic index of bread. It will not aggravate diabetes. In fact, it may lower it. The glycemic index of flour is higher than that of cassava. It is only whole wheat bread (i.e. wheat flour with bran intact) that has a lower glycemic index.”

Some flour millers are said to be giving  ridiculous excuses that the wheat flour being imported into the country had low protein content, and that mixing it with local cassava flour would rob the finished product of adequate protein content. Some flour millers even stockpiled cassava flour to deceive Standard Organisation of Nigeria, (SON) and Nigerians that they were complying with government directive, while they were not.

Adesina  said that the nation had depended so much on wheat importation which, according to him, “costs the country N635 billion annually at the detriment of Nigerian farmers.”

He added: “The issue of use of cassava bread is also an economic decision. Nigeria spends N635 billion importing wheat and keeping farmers of wheat exporting countries employed, exporting jobs, while displacing jobs at home.”

In 2011, estimates show that Africa spent more than $50 billion on food imports. The rising prices of food does not make the situation better in the years ahead, according to Adesina.

This probably informed  why as the President of Nigeria between 1999 and 2007, Obasanjo promoted a 10 percent cassava inclusion policy in wheat bread in an effort to promote agricultural growth and diversify the economy through the  Cassava Initiative  project.

It was envisioned that Nigeria, being the largest producer of cassava in the world, could engage in a more effective utilisation of the crop through value addition with a view to promoting the agro-allied industrial sector.

Sometimes in  2005, Obasanjo’s government made it mandatory for bakers to include 10 percent of cassava flour in the production of bread and all other flour-based products. Unfortunately, his effort was frustrated  by the millers  who said it was not possible to include cassava in wheat flour.

Even out of office, Obasanjo, now  International Institute of Tropical Agriculture’s Ambassador, still believes  in the policy as he said recently that Africa needs to rethink its food import burden and consider ‘local content’ options, such as the inclusion of cassava flour in wheat to reduce the rising import bills.

“If we want to develop, we must change our consumption habits. We must consume what is our own, what is around us in Africa. In this way, we will be able to make progress,” Obasanjo added.

Building on that success, researchers from IITA, working in a pilot bakery, have raised cassava content in bread to 40 percent without compromising quality.

Upon tasting the 40 percent cassava bread, Obasanjo exclaimed, “The taste is good!”

“We need to promote it to make people adopt and consume it,” he said. Besides relieving the burden on food imports, the adoption of cassava flour offers several benefits to Africa. It promises to make cassava competitive by creating markets for the root crop and offering fair prices to farmers.

With climate change taking a negative toll on most grains, cassava production is fast becoming an option. The crop’s tolerance of extreme weather such as drought and its ability to thrive on poor soils are increasing its appeal.

In Nigeria, for instance, the government estimates that the 40 percent inclusion of cassava flour in wheat bread could help the country save about N254 billion ($1.7 billion) annually.

“But more than savings, this will also provide jobs for our youths,” said Adesina.

The success of the cassava policy in Nigeria aims to radiate benefits to larger aspects of the economy including helping in stabilising the exchange rate of the naira to the dollar and more importantly, making the farmers proud and richer.

So, one major challenge, which advocates of cassava flour said they are facing, is how to convince flour millers that Nigeria’s cassava flour is of good quality. Many of them expressed the fear that not many processing companies abound, and that the cassava flour may not be adequately processed to meet the desired quality.