As part of reforms by  Godwin Obaseki to boost food sufficiency, the Edo State government has rolled out plans for over 109 poultry farmers expected to benefit from the government’s N130,800,000 investment in the pilot phase of its poultry production scheme. 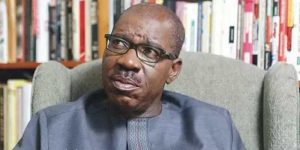 Joe Okojie, special adviser to the governor on agriculture, forestry and food security programme, disclosed this at a sensitisation programme to mobilise beneficiaries of the agriprenuer programme.

He said the state’s agriprenuer programme is being implemented with support from the Central Bank of Nigeria (CBN) to ensure food security and wealth creation in the state.

Okojie noted that the investment in poultry farming by the Obaseki-led government is part of deliberate policy to meet the protein requirement in the state as well as reduce importation of frozen poultry products.

According to him, “About 109 poultry farmers will be given 1,000 birds each at a production cost of N130,800,000 to raise poultry products for sales during the yuletide season.”

He said, “The benefitting farmers must open bank accounts and would be given a loam at nine percent interest rate, while the birds would be sold directly to off takers.”

The governor’s aide warned that the state government will not allow a situation where some farmers under a previous scheme divert farm inputs given to them.

He said, “So far we have done well and we are still producing. We are currently harvesting rice and it is being sold to a processor in the state.”

The next phase of the agriprenuer programme according to Okojie, is the plan by the state government to invest in piggery farming.”

In his vote of thanks, Edo State Chairman of FADAMA Federated farmers, Chester Ogieva, commended the state government for the initiative, adding that it will increase employment and income in the poultry sub-sector.

“Many people want to go into agribusiness but do not have the finance to do so. We are happy that the state government is giving us loans to increase our poultry farming,” Ogieva added.