Africa’s telecommunications giant, Airtel Africa Plc, has reported 13.8 per cent growth in its revenue for the nine-months ended 31 December 2020 to $2.87 billion from $2.52 billion generated during the corresponding period of 2019. It also reported 21.8 per cent year-on-year growth to $800 million in its operating profit for the period under review from $657 million generated in December 2019. 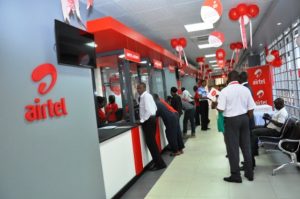 In the 9-months’ unaudited results it filed to the Nigerian Stock Exchange on Friday and accessed by Business A.M, Airtel said the performance is a reflection of both its resilience through the covid-19 pandemic within the six months prior to the reporting period and the continued improvement in its execution and performances as lockdown restrictions across its countries of operation eased.

In Nigeria, revenue in reported currency grew by 13.5 per cent to $1.13 billion from $995 million in 2019, while in constant currency revenue grew by 21.6 per cent as a result of Nigerian naira devaluation by 7.9 per cent year on year. Also, revenue growth in Q3’21 improved to 15.9 per cent in reported currency, and to 24.1 per cent in constant currency. Further, voice revenue in Nigeria grew by double-digit to $657 million within the nine months period, driven by the combination of a growing customer base and the average revenue per unit. Airtel recorded an 11.5 per cent growth in its customer base which was driven by the continued expansion of its distribution network and network infrastructure.

Raghunath Mandava, chief executive officer, said: “Our nine-month performance reflects both the resilience of our business model through the Covid-19 pandemic and, for the last six months, a continued improvement in our execution and performance as lockdown restrictions have eased across our countries of operation. I am particularly pleased with our performance in the latest third quarter, which has demonstrated accelerated growth in both revenue and underlying EBITDA in constant currency to 22.8 per cent and 28.3 per cent respectively.

“In part this is due to our continued delivery of strong customer growth in Q3, despite the introduction mid-December of additional customer registration requirements in Nigeria. This has meant a temporary halt to the ability of all operators in the country to on-board new customers. But we are working closely with the government to ensure that all our subscribers provide their valid National Identification Numbers (NINs) and update their SIM registration records, such that disruption is minimised. Our performance improvement is evident across the business,” the CEO said.

Mandava also revealed that he is pleased on a regional level, that the continued strong revenue growth in Nigeria and East Africa, growing 21.6 per cent and 23.4 per cent in constant currency, is increasingly being matched by improvements across Francophone Africa countries, posting 8.0 per cent growth for the period and 15.0 per cent in Q3, adding that Airtel’s rollout into rural markets, along with robust customer growth, has helped voice growth of 10 per cent, while data and mobile money continued to be growth engines, with over 30 per cent growth.

However, with the Covid-19 pandemic having little impact on the company’s most recent quarter, the CEO said Airtel remains vigilant about the recent news flow around new strains of the virus and further actions by governments to minimise contagion in its countries of operation, stating that the opportunities for sustainable profitable growth from the underpenetrated markets for both mobile and mobile money services remain hugely attractive, and that Airtel is confident of continuing to deliver on its growth strategy.

Meanwhile, a breakdown of the results shows that the increase in revenue by 13.8 per cent was largely driven by 18.6 per cent of underlying constant currency growth which was partially offset by currency devaluations, mainly in the Nigerian naira (7.9%), Zambian kwacha (46.6%) and Kenyan shilling (9%), while there was a partial offset by appreciation in the Central African franc (8.7%). Also, reported revenue benefitted from one-time exceptional revenue of $20 million relating to a settlement in Niger.

Also, during the period under review, Airtel’s operating profit amounted to $800 million, up 21.8 per cent in reported currency, as a result of strong revenue growth and lower operating expenditures in proportion to revenue. Thus, operating profit in constant currency grew by almost 30 per cent; while the profit after tax (PAT) was down by 21.1 per cent to $261 million as a result of the past year’s recognition of a one-off gain of $72 million linked to the expired indemnity to certain pre-IPO investors, a higher deferred tax credit of $29 million in the previous period, as well as higher finance costs and tax in the current period. Apart from the benefit of exceptional items and one-off derivative gain of $47 million in the preceding period, PAT increased by 30.1 per cent.

While performance across the Francophone nations was mixed, with revenue growth in Democratic Republic of the Congo (DRC), Gabon, Niger and Chad partially offset by a marginal decline in few countries. In East Africa, there was a strong 14.9 per cent revenue growth in reported currency; voice revenue amounted to $486 million.

There was also a continued improvement in revenue growth and the EBITDA profitability for the nine months to $1.3 billion, and free cash flow was $466 million, rising 20 per cent from 2019.