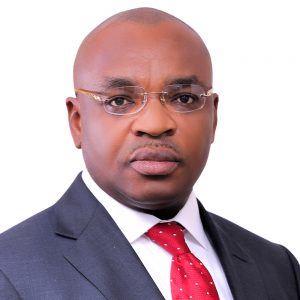 The Ibom Deep Seaport & Free Trade Zone (IDSP&FTZ) to be built on 2,565 hectares of land south-east of the state, has been on the drawing board for long. It received a federal government approval in May 2015, with a RFQ (request for qualification) issued in January 2018. It is to be built via a public private participation (PPP) framework.

The Covid-19 knock-on effects on the state notwithstanding, financing of the gigantic deep seaport remains a critical tough knot for a state taking the biggest monthly envelop from the federation accounts allocation (FAAC). For instance, Business A.M.’s interpretation of Emmanuel administration’s body language is – it may not kick start the project – neither would the next incoming government able to begin operations on it. If so, when will it be able to come on stream?

“We are waiting for the economy locked by COVID-19 to open globally. As soon as that is done, we will look for more investors on the project,” Emmanuel said, adding that the deep seaport was approved last week by the federal executive council in Abuja.

“We have successfully carried out intelligence on the project. We need extract of approval to concretise the seaport. We may not start it; neither will the next administration commence successful operations on the project. But it is a project for our children. It is a project that will generate more employment opportunities for our people and much revenue for the state,” Governor Emmanuel said.

The seaport is expected to form the nucleus of Ibom Industrial City involving the host six local government areas in the state, he further said.

“By design, the Ibom Deep Sea Port & Free Trade Zone is coming on to become the “Eastern Gateway of Nigeria, and will provide vital port capacity for the country. It will serve as trans-shipment port for the West and Central Africa region. It will mainly handle container, breakbulk, dry bulk, and liquid cargo,” he explained.

The proposed seaport at Ibaka would benefit from multi-modal connectivity offered by its location, with unparalleled access to coastal railway line, the Akwa Ibom International Airport at Okobo–Oron, and an extensive national road network. A 30-km road connecting the seaport to the federal highway will also be built as part of the project. It will have a number of specialized terminals, which will handle post and new panamax size vessels. Its handling capacity will grow from 1.2 million twenty-foot equivalent units (TEUs) in 2021 to four million TEUs by 2040.

Meanwhile, the seaport is only 11.2 nautical miles from a proposed $2-billion Bakassi Deep Seaport planned by neighbouring Cross River State under Governor Ben Ayade. For state officials in Akwa Ibom, the Ibom seaport is “a key component of the state’s economic empowerment plans.”