Amyriad of negative events, ranging from the oil price shock, to the global pandemic, have overwhelmed the Nigerian economy, thereby necessitating a review of the budget spending and its assumptions to cater for additional expenditure plans like the Covid-19 crisis intervention fund (N288.02 billion) and other notable expansions along the lines of debt service (+8.98%), and recurrent expenditure (+2.07%). 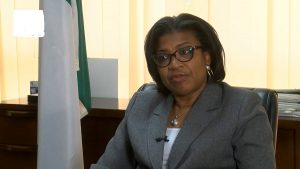 The Nigerian federal and states public debt portfolio as at the close of the third quarter of 2020 stood at N32.22 trillion, according to recently reported information of Nigeria’ debt stock profile as at Q3 2020 by the National Bureau of Statistics. Also, according to the statistics office based in Abuja, the external debt stood at N12.19 trillion, while internal or domestic debt stood at N20.04 trillion, indicating 37.82 per cent and 62.18 per cent of the total public debt stock respectively. Meanwhile, in the recently signed fiscal year 2021 budget, it has a total debt service of N3.32 trillion, equivalent to 42 per cent of total revenue expected to be generated during the year. To this, economic analysts who have the watching the Nigerian economy have expressed the view that it is not the first time the federal government’s revenue projections will prove overly hopeful, and that the ratio will therefore come out rather worse than implied by its budget.

Budgeted revenue to be used for debt servicing in 2021

Over the year, the FG’s retained revenue came in at N3.94 trillion, a 27 per cent shortfall relative to the budget target of N5.36 trillion, but at the same time weaker than N4.54 trillion achieved in 2019, chiefly due to the underwhelming performance of the oil market. Noteworthy, was the oil sector performance which outpaced the budgeted figure of N1.01 trillion by 157 per cent to settle at N1.52 trillion by year-end, accounting for 38.7 per cent of total FGN retained revenue.

However, debt service on the government’s external debt profile reached a total of $507 million by the close of September 2020, divided between $263 million and $244 million on market and non-market debt respectively. A cursory look into the profile points to the fact that the market figure was the same as it was in the corresponding Q3 of the preceding year and the first three months of the year 2020 because the FGN has not issued Eurobonds, which pay semi-annual coupons, since November 2018. Thus, the burden, as highlighted by some economic analysts should be comfortable for an oil exporter on the scale of Nigeria, which has a quota of 1.52 million barrels per day for Q1 ’21 under the latest OPEC+ agreement, particularly when the current firmness of the crude price which has rallied above $50 is allowed. Nonetheless, the strains will emerge when we view debt service in the context of FGN revenue rather than of oil export earnings.

The detailed reports of the Budget Office of the Federation show that total debt service of N1.57 trillion in the first six months of 2020 covered 95 per cent of total government inflows. A cursory analysis of the total debt service points that the ratio appears even worse than usual. This is because the lockdown in response to the Covid-19 virus has constrained revenue in the period under review and also because revenue collection tends to gather momentum in the second half. By way of comparison, the debt service of N2.45 trillion represented 59 per cent of total inflows in 2019.

In a related development, the minister for finance, budget and national planning, Zainab Ahmed, also revealed during the ministry’s presentation of the 2021 Appropriation Bill, that the cost of servicing Nigeria’s public debt has surged by 88.8 per cent quarter on quarter to N803.69 billion in the third quarter of 2020 from N425.7 billion in the preceding quarter.

Further disaggregation of Nigeria’s foreign debt, according to the NBS, showed that $16.74 billion of the debt was multilateral; $502.38 million was bilateral from the African Development Bank Group (AfDB) and another $3.26 billion bilateral from the Exim Bank of China, JICA, India, and KFW, while $11.17 billion was commercial representing Eurobonds and Diaspora Bonds.

But, based on the opinion of analysts at FBN Quest Capital Research: “Upon annual interest and fee payments in the 12 months to end-September, and the stock of external debt as at end-March, we calculate the average borrowing cost from the World Bank Group at 1.1 per cent, the African Development Bank Group at 2.0 per cent and Exim Bank of China at 2.7 per cent. For the FGN’s market (commercial) obligations, the average comes out at 7.5 per cent.”

However, in April 2020, Nigeria’s federal government borrowed about $3.6 billion from the IMF under its rapid financing instrument to tackle external shocks occasioned by the virus in this case. Meanwhile, the repayments of principal start in 2023 and run through until 2025. The credit, unlike its traditional arrangements, comes without the Fund’s conditionality, which explains why the FGN drew down the facility. Though, the repayments of principal in the third quarter of 2020 came to $144 million, notably $59 million for the World Bank Group and $58 million for Exim Bank of China.

In conclusion, analysts believe that growth in the non-oil sector would be helped by quicker vaccinations, amidst a pick-up in economic activities, even though, they still do not expect the economy to waver out of a recession until the end of the second quarter, given the overdependence on revenue. In addition, weak public investments, alongside limited foreign direct investments put down hardly any room for fiscal consolidation. While the government requires a funding plug of N5.60 trillion, weak investor sentiment could upscale the premium demanded by foreign investors, thus increasing its borrowing costs.