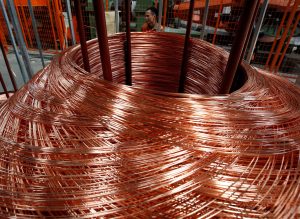 Despite some tariff-related headwinds, copper looks set to be the standout metal in the coming few years.

Copper price are well supported by economic fundamentals and changing technologies, according to Arden Partners “We see copper as a standout medium to long-term investment.”

This opening salvo from a recent report on the copper sector by analysts at Arden Partners paints a pretty unequivocal picture of the upside for copper.

On the demand side, it’s all about Chinese infrastructure, new technologies and the “green revolution,” says Arden. On the demand side, more than a decade of underinvestment means that the slightest shock to supply, like a strike at the giant Escondida mine in Chile, is likely to send tremors through the market and set prices on an upward trajectory.

The obvious way to play this long-term bullish climate for copper is through a copper specialist like Antofagasta, or through one or more of the established major copper miners.

But Arden takes a different approach. Instead the broker casts its eye down the value chain and over some of the more promising emerging mid-tier companies. Among the most prominent of these are Solgold which is developing the Cascabel project in Ecuador and is the subject of competing interest from several majors, and Central Asia Metals which has established a reputation as a consistently reliable low-cost producer from its tailings operations in Kazakhstan.

The red metal is often said to be the bellwether of the global economy because it’s used in so many everyday applications, from wiring to piping to household utensils to roofing. There are two key qualities.

Foremost, its conductivity. Copper is the premier metal for the transportation and delivery of electricity, and as the world goes ever greener is likely to be increasingly in demand in new battery-powered vehicles. Indeed, this was the very reason given by BHPBilliton for its renewed interest in copper exploration, as stated in a talk given by the head of the company’s America operations Danny Malchuk towards the end of last year.

But the other key quality of copper is its resistance to corrosion. That allows it to be used in all sorts of practical ways in households and offices, and in particular in places where modernisation is underway, like China.

China accounts for around 50 percent of global copper demand, according to Arden, and the outlook for the Chinese construction sector in the remainder of 2018 and into 2019 is bullish.

Having said that, recent jitters about global trade wars have shaved around 18% off the copper price in recent months,; as investors fretted that tariffs would hurt global productivity and, ultimately, hamper demand.

So far though, the global economy has continued to grow in robust fashion. Much of this is driven by the strength in the US economy, but Chinese economic expansion also continues to impress.

“We believe copper is set to bounce back, with the market looking to go into deficit from 2019 onwards into 2022 and potentially beyond, due to the supposed dearth of new projects,” says Arden.

And that’s where Asiamet, Solgold, MOD and others enter the picture. In a rising copper market, the upside from an explorer as it transitions into development and then production is likely to be all the greater than an existing producer with an established yield. The risk is greater too of course, but with a company like Asiamet, for example, there is plenty of reassurance to be found in the track record of the team behind it. These are the men who built up the Australian giant Oxiana into a multi-billion dollar company during the last commodities boom.

The team at MOD boast decades of experience between them too, and although Solgold has been through some upheavals to get where it is now, the current technical team is also highly experienced.

So here we have a swathe of seasoned professionals moving forward with very promising assets in a rising copper market. Arden reckons China is about to go into a major “growth and regenerative phase” that will support the copper price above US$3.00 per pound in the long-term.

Against this background it rates Central Asia, Solgold, Atalaya, MOD and Asiamet all as “buy”, with Asiamet set to deliver the greatest upside of all to its current share price.