Nigeria’s digital currency, the eNaira, has yet to gain the envisaged traction nearly a year after it was launched, with volume and value of transactions on the platform reaching above 200,000 and N4 billion, respectively, as at August.

When it was launched in October 2021 as a Central Bank of Nigeria-issued digital currency that provides a unique form of money denominated in naira, the promoters said the eNaira would support the digital economy, improve economic activities, simplify and facilitate cross-border payments and trade, ensure the inclusion of excluded people in the financial system, improve the effectiveness of monetary policies, ease tax remittance and collection to support economic growth and ease in administering strategic social interventions to support Nigerians. President Muhammadu Buhari, who launched the eNaira, said it would increase the country’s GDP by $29 billion over the next 10 years. 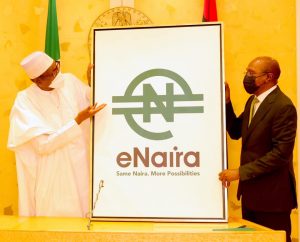 “When countries come on board and create their own digital currencies, then we will be able to have faster exchange of currencies and therefore we might be able to boost cross-border trade at a much lower cost,” said Rakiya Muhammad, CBN director of information and technology department.

Chijioke Ekechukwu, managing director/chief executive officer, Dignity Finance and Investment Limited, noted that the eNaira would eliminate restrictions on accessibility to foreign currencies, thereby boosting foreign payments and trade, and lead to improved visibility of transactions for financial institutions. He also said it would reduce pressure on demand for foreign currency, improve the naira’s value, while the forces of demand and supply would hardly affect exchange rate.

Nearly one year after, however, the eNaira has recorded slow adoption. Following 7,300 downloads per day (dpd) in the first quarter of 2022, a source in one of the commercial banks leading in the digital currency platform projected the eNaira to run on about 10,000 dpd in the second quarter of the year. Though not so poor a record given the relative novelty of the product, according to the source, the operators were concerned with the low level of Person-to-Person (P2P) transaction, indicating that actual usage by individuals as at the time was not as active as the downloads.

To drive eNaira adoption, the CBN has continued to woo the banking public to embrace the platform as a safe and efficient means of transaction, including through sensitisation programme for traders, bureaux de change, socio-cultural groups, and other stakeholders.

In August, at the Grand Finale of the 2022 eNaira Hackathon in Abuja, the CBN announced the introduction of the eNaira USSD, saying that Nigerians would be able to transact on eNaira wallets simply by dialling USSD code, *997#, on their mobile phones. The new USSD channel allows Nigerians using the *997# short code to create their eNaira wallet. Once this is done, they can easily check balances and transfer funds, as well as safely buy airtime or data for themselves or friends and family.

The hackathon event itself, the CBN said, was a continuation of the eNaira journey, and the first among many to come given that the future of central banking is inextricably bound to innovation. It was a CBN’s collaborative initiative with the African Fintec Foundry aimed at bringing together teams of talented entrepreneurs, developers, designers, solutions developers, problem-solvers and coding experts from Africa to develop innovative solutions for improved adoption of the eNaira.

Following the initiation of the second phase of the project, Godwin Emefiele, CBN governor, envisioned greater success for the project with phase two expected to deliver more gains with a target of about 8,000,000 active users based on estimations using the diffusion of innovation model.

Earlier in September, Flutterwave adopted the eNaira as a payment means. Azeez Oluwafemi, senior vice president, products and design at Flutterwave, said the eNaira feature was important for the merchants and customers because it offers an alternative payment method that many users find seamless.

Only recently, Clickatell, a leading global provider of business to consumer communication, announced a partnership with CBN that is projected to help deliver fast, simple, and cost-effective eNaira banking services to all Nigerians using the USSD channel, eliminating the need for data and available on all handsets.

Speaking on the partnership, Uzo Nwani, Clickatell commercial director, West Africa, said introducing the USSD short code allows non-banked Nigerians, many of whom do not have smartphones, to access cashless banking services and is also a big win for the company’s stated goals of delivering meaningful financial inclusion.

Experts have attributed the slow adoption of the eNaira to a number of challenges which are believed to be majorly embedded in Nigeria’s structural economic and environmental problems. Some of the reason given include a lack of efficient awareness, limited knowledge of digital currency operations and restrictions regarding Bank Verification Numbers (BVN) and other Know Your Customer (KYC) requirements. Also, many Nigerians do not know the difference between the digital representation of cash deposits in bank accounts and the eNaira in digital wallets, making eNaira an unattractive exploit.

Adolphus Abraham, a banker and business development professional, said in an online article that the Nigerian economy is significantly unstructured and informal so anything that requires structure, regulation and order like the eNaira may become unpopular with the people.

Uche Uwaleke, chartered banker and chairman, Chartered Institute of Bankers of Nigeria, Abuja branch, blamed the slow adoption of the eNaira on a number of factors, among which is a low level and even lack of awareness by a majority of target users, firms, individuals and Nigerians generally.

“Unlike many bank apps, the eNaira app is not easy to use. So many steps are involved to download and use the app which can be discouraging especially to the not-too enlightened public,” Uwaleke said.

“The initial rollout was meant for only those with bank account. Before now, the app could only be used in areas where there is internet connection,” he said.

He added that the availability of many other digital platforms offered by commercial banks also provided alternatives for the banking public.

But despite these challenges, analysts are optimistic that the eNaira would see an increased adoption in the near future.

Expressing hope of an increased eNaira adoption, Uwaleke hinged his optimism on the introduction of the USSD code for eNaira usage, which means the services are now available even in areas without internet connection; the increase in awareness campaigns by the CBN; and the fact that transactions conducted via the eNaira platform come at little or no cost unlike that of commercial banks, making eNaira usage relatively cheaper.

He said further that the eNaira platform, being powered by the CBN, is relatively safer and provides more confidence than other digital payment platforms.

Teniola Olusola, a former president of the Association of Telecommunication Companies of Nigeria (ATCON), advised the government to transition from the analogue systems that are currently used to fully adopting e-governance to carry out its processes, assuring that this would facilitate easier adoption of the eNaira.