Anambra government has commended Obiora Okonkwo, the owner of newly launched commercial airliner, United Nigeria Airlines, with inaugural flights last Friday between Lagos and Enugu, thereby deepening local capacity and competition on the domestic route. The state government said the new domestic carrier is led by a known business leader, Okonkwo, who is also an indigene of the state. 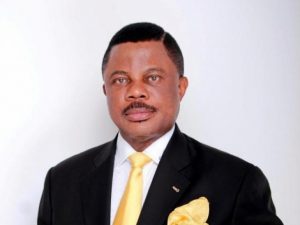 United Nigeria Airlines’ inaugural flight, with one of its four Embraer 145 aircraft, landed at the AkanuIbiam International Airport, Enugu at 11am on Friday, February 12, to a reception attended by Enugu State government officials, and aviation stakeholders.

According to C. Don Adinuba, commissioner for information and public enlightenment in Anambra, Okonkwo’s foray into airline business at this time of Covid-19 pandemic, “only a courageous and audacious entrepreneur can launch an airline anywhere in the world today in view of the state of the industry worldwide.”

He noted that the coronavirus pandemic has since March 2020 dealt a serious blow to the airline sector in particular, and the entire travel industry in general.

The International Air Transport Association (IATA) said Covid-19 dealt a heavy blow to global airline operations, with huge costs amounting to $157 billion in 2020, and an additional $38.7 billion expected in 2021.

Adinuba said Okonkwo’s airline business bold move follows in the footsteps of Allen Onyema, chairman Air Peace Airlines, another great ambassador of Anambra State, who is increasing his fleet from 27 to 40 aircraft, despite the current turbulent state of the global airline business.

“The Government and people of Anambra State are proud that while most airlines are struggling and making use of old and second-hand equipment, Air Peace is deploying brand new machines in its local, regional and international operations. We are supremely confident that United Nigeria Airlines will take the aviation industry by storm, as Air Peace has done since 2013, especially with regard to the safety record, schedule integrity and quality ground and inflight services,” said Adinuba, in a statement in Awka, the state capital.

For Okonkwo, chairman of the new airline, his investment was to fill an industry gap, and unite Nigeria. He explained that his choice of Enugu as hub of his company was strategic for the airlines’ mission.

“Our short-term goal is to consolidate. We have a base in Enugu, and we have to consolidate, establish all our routes, and then work on expansion. We want to expand beyond Nigeria, starting from the West Coast, just for a start. We have a big plan. The market is huge: there is need for a lot of aircraft,” he said shortly after touch down at the Enugu Airport.

He said, he expects industry competition. “Those who are in the business should be competing with us first. We should be the people they should be worried about, because we are new. We think that within the next three months, we shall be able to expand our routes.”

Traffic at the AkanuIbiam International Airport, Enugu has seen dramatic increases lately, according to the airport manager, Cecilia Oguama, while acknowledging that the terminal was the right route for United Airlines to launch into the market, given its recent traffic increases.

“The traffic in and out of the Enugu airport has increased tremendously. We are now having between 6,000 and 7,000 passengers weekly. Before COVID-19, we had less than 1,000 passenger traffic, and we had only one airline then. In 2019, we only had Air Peace operating, but now, we have four other airlines operating regularly, including United Airline,” Oguama said.

She said the terminal receives up to eight flights daily, with United Nigeria Airlines adding to the flight operators. “With Enugu as their base, United Airlines would enjoy tremendous support from the airport,” the airport manager said.

Meanwhile, the Anambra government has asked Okonkwo to use the incoming Anambra International Cargo Airport still under construction, as its hub. “United Nigeria Airlines has demonstrated reasonable social consciousness, and the government would like to highlight a message that strikes a chord in the state, and has become a key component of the strategy driving the phenomenal progress the state has experienced in the last few years: Akulueuno, or Think Home, the government said.

Adinuba, the information commissioner informed that Onyema, the Air Peace owner, has promised to build a hanger at the Anambra cargo & passenger airport, still under construction. The hanger will cause a lot of local and international carriers to bring their equipment to the airport for maintenance and repairs,” he said.

He informed that the Air Peace chairman is working with the state government to lobby Embraer Corporation of Brazil, the world’s fourth largest airplane manufacturer, to locate an Africa service centre at the Anambra Airport, which will be commissioned later in the year.

He encouraged Okonkwo to consider making the Anambra Airport the headquarters of his United Nigeria Airlines operations, just like Sosoliso Airlines had made Enugu, the hub of its operations to decentralize development in Nigeria. He said the decision turned out to be a critical success factor for the air carrier. The Sosoliso chairman, Victor Ikwuemesi, and Okonkwo both hail from Ogidi in Idemmili North local government area of the state, and were friends until Ikwuemesi died last April in London.

Adinuba said he believes United Nigeria Airlines would be successful, and that the Anambra government will be glad to work with it to achieve its goal, as the carrier and its founder are the state’s ambassadors.