APC governors on Monday 25th November held a parley in Jos to discuss how the APC controlled states would collaborate with the Federal Government to better a lot of Nigerians. 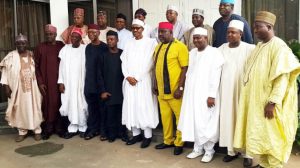 The Secretary to the Government of the Federation Boss Mustapha who represented President Muhammadu Buhari described the parley between the Federal Government and governors from the All Progressives Congress controlled states as a reflection of the collective commitment of the federal and state governments to find solutions to the developmental challenges facing the nation.
Mustapha in the address at the 3rd FG- APC Governor’s Forum on policy synergy noted that the Buhari administration is committed to improving the welfare of all Nigerians especially as the nation is on a positive track of food self-sufficiency in some staples crops.
Mustapha also disclosed that “huge investments have been made in the transportation sector especially the railway and road network,” as he called on the state governments to “double their support in the anti-corruption battle as the gains of our collaboration continue to face the danger of annihilation if corruption persists at sub-national levels.”

Governor, Simon Lalong who hosted the forum said the engagement was crucial as it is aimed at “strengthening public service delivery in the APC and the nation at large” and urged participants to “justify why we were chosen from among millions of Nigerians by devising ingenious ways of meeting the expectations of the public.”

The Chairman of  Progressive Governors Forum and Governor of Kebbi State, Abubakar Bagudu also noted that the theme of the parley, ‘Improving Public  Service Delivery’ was apt as they were committed to creating governance identity in the APC controlled State.

The APC National Chairman, Adams Oshiomhole who also spoke charged the Governors to show a good example by focusing on education and paying the new minimum wage because “government and governance are about the people.”