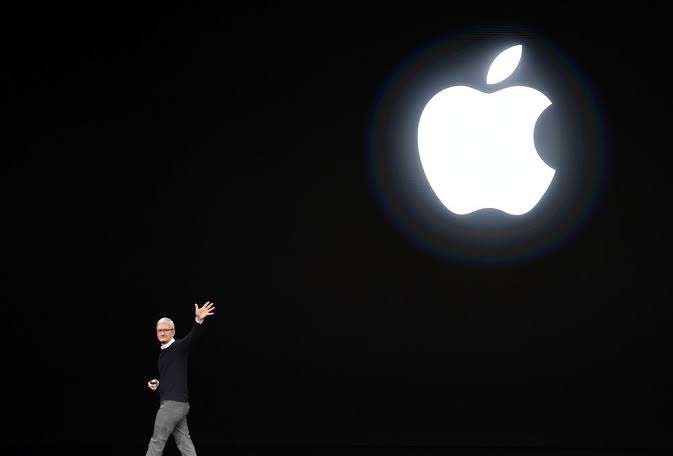 When Apple Inc (AAPL.O) posts quarterly results on Tuesday, investors will be looking for fresh evidence the iPhone maker should be treated as a producer of high-margin, subscription services after its stock market value touched $1.4 trillion and its earnings multiple trades at decade highs.

The Cupertino, California corporation’s stock has doubled over the past year, even as iPhone sales contract along with the rest of the global smartphone market. Fueling its stellar run has been Chief Executive Tim Cook’s push to turn Apple’s loyal client base into a source of steady services revenue, including streaming video and a credit card launched last year with Goldman Sachs (GS.N).

Also supporting Apple’s stock is excitement around an eventual pickup in iPhone demand with the rollout of 5G wireless technology, and low interest rates that have broadly helped Wall Street.

Shares of Apple fell 2.9% on Monday from record highs as fears about the economic fallout of the coronavirus outbreak in China hit Wall Street. Analysts on Apple’s quarterly earnings call after the bell on Tuesday will listen for comments concerning the impact on its manufacturing operations in China.Apple’s market capitalization briefly exceeded $1.4 trillion last Wednesday for the first time, but it has yet to end a session at that level. Some investors worry that Apple’s rally, and surging earnings multiple, may have become overextended.

“The run-up in the stock is a concern, and I wouldn’t be surprised if we see a bit of a pullback in the near future,” said People’s United Advisors chief equity strategist John Conlon, who added that Apple’s services business has become his main reason for owning stock.

Following its recent rally, Apple’s stock is trading at the equivalent of 23 times expected earnings, its highest multiple since 2010, according to Refinitiv. Apple’s average PE over the past decade was about 14, lagging other high-growth companies with recurring revenue and reflecting its singular dependence on iPhones sales and reliance on persuading consumers to upgrade their phones year after year.

Apple is on track to reach a goal to double its 2016 services revenue to $48.7 billion by the end of fiscal 2020 as it focuses on selling high-margin subscriptions to its user base. Many investors envision an increasingly rosy future for its earnings, a trend reflected in its soaring earnings multiple.

Adding to existing services including cloud storage, the App Store and music, Apple last year launched an ambitious video streaming service, along with its credit card, a subscription news app and a videogame service.

Apple has also increased the emphasis on its AppleCare, its extended warranty program. For example, the iPhone’s “settings” now includes reminders encouraging people to buy or renew their AppleCare plans.

In the September quarter, Apple said its services revenue hit $12.51 billion, topping analysts expectations of $12.15 billion. Services accounted for 20% of total revenue in that quarter, up from 17% in the same quarter the year before.

Apple also gave cost of sales data showing gross margins for its services segment rose to 64% from a 61% a year earlier. That is far more generous than Apple’s overall gross margin of around 38% in recent years.

Still, for a business segment getting the most attention from Wall Street, Apple provides limited details. Apple’s quarterly reports break out sales of iPhones, Macs and iPads, but a breakdown of results from products falling within the services category so far has not been released.

Apple’s recent strong stock performance has been perpetuated by fund managers buying its shares in order to avoid underperforming their benchmarks, a trend that could reverse when the recent rally ends, Cowen analyst Krish Sankar wrote in a client note last week.

For the fiscal first quarter, which ended in December, analysts on average expect services revenue to jump 19.7% to $13.0 billion, according to Refinitiv.