Tightening COVID-19 restrictions in China could force down production of Apple Inc’s iPhone at one of the world’s largest factories by as much as 30 percent in November, Reuters reported on Monday quoting a source with direct knowledge of the matter.

The source who declined to be identified as the information was private, according to Reuters, also said Apple manufacturing partner Foxconn, formally Hon Hai Precision Industry Co Ltd, is working to boost production at another factory in Shenzhen city to make up for the shortfall. 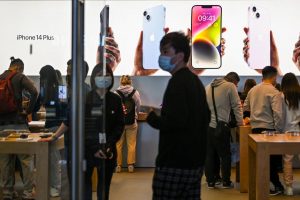 Foxconn’s main Zhengzhou plant in central China, which employs about 200,000 people, was hit by the stringent curbs after an outbreak at the factory, which led the city of about 10 million people locked down as a result.

It’s not clear how many cases of the virus have been identified, but the outbreak forced staff to lock down at the workplace, which has reportedly caused unrest and even led some employees fleeing the site at weekend, with some jumping a fence outside the plant.

Last week, Foxconn announced it was banning all dine-in catering at the Zhengzhou plant and would be requiring workers to eat meals in their rooms. At the same time, the Taiwanese company said it was maintaining normal production as it ramped up iPhone 14 assembly ahead of the busy holiday period.

The possible impact on production comes amid a traditionally busy time for electronics makers ahead of the year-end holiday season, which is also a prime time for vendors such as Apple.

Apple did not respond to a request for comment.

It also builds the device in India, but its Zhengzhou factory assembles the majority of its global output.
Localities in China continue to grapple with President Xi Jinping’s rigid zero-COVID policy, which imposes strict measures including anything from regular testing and travel restrictions to full-scale lockdowns.
Factories are usually able to continue to operate under a “closed loop” system where staff live and work on-site, but the arrangements have caused various problems, including workers expressing anger on social media at their treatment and living conditions.
Businessamlive Website Stats