Global: Global investor risk appetite remains tepid at best, with select markets trading in the red this week, while some saw pockets of buy-side action following multiple weeks of sell-side activity. Starting in the Asia- Pacific region, gains across the region were broad based with all markets closing in the green. The Hong Kong benchmark the Hang Seng was the best performer in the region, rising 4.11%. Additionally, the Shanghai Composite and the Japanese Nikkei 225 rose 2.02% and 1.18%, as investors reacted to the latest data out of the region.

Equites traded with gains on Friday as the People’s Bank of China announced its decision to keep one-year loan interest rates unchanged at 3.70%, while lowering the five-year loans rate to 4.45%. Furthermore, Japanese April inflation rose to 2.5%. Moving to Europe, losses in the region were broad-based with all major indices closing in the read, as fears over rising energy costs and inflation mount. The Swiss SMI was the worst performer in the region falling 3.11% w/w, while the German Dax and FTSE 100 dipped 0.40% and 0.90% respectively. Finally, in North America, growth stocks continue to witness strong-sell side activity as investors’ risk appetite wanes. The tech-heavy NASDAQ was the worst performer in the region, trading 5.01% down w/w at time of publication. The S&P 500 and the Dow Jones Industrial Average were also down 3.93% and 3.73% w/w respectively. The release of key data reports this week dampened investor interest in the region; The sales of existing homes in the US decreased by 2.4% in April, while initial jobless claims in increased by 21,000 w/w to 218,000, according to data from the Department of Labor. The figure exceeded expectations of c.200,000.

Domestic Economy: According to NBS data, headline inflation increased by 90 basis points y/y to 16.82% in April owing to the prevailing energy crisis and rising instances of insecurity. Food inflation also rose as a result of increased festive demand and the impact of higher energy prices on food transport. While the lingering effects of the energy shock could upset inflation in May, the disgruntle between members of the Independent Petroleum Marketers Association of Nigeria (IPMAN) and relevant authorities could trigger a new energy crisis and offset the cooling effects of a full border reopening.

Equities: It was a mixed week of trading across the NGX, with the bears coming out on top. The Nigerian market eased 0.23% w/w, as investors digested the latest inflation data for the country. After posting consecutive gains in recent weeks, the Consumer Goods sector finally saw some profit-taking action, as the index fell 1.01% w/w; notably, FLOURMILL dipped 10.74% w/w to ₦37.00/share. The sector has been a top performer on the index with a YTD return of +17.33%, having risen 11.87% in May thus far. Moving to the Banking space, broad-based selloffs across the sector saw it fall 1.25% w/w. FIDELITYBK saw its share price dip sharply this week falling 5.68% to 3.49/share, as it appears some investors are seeking to book unrealized gains in the counter, which is up 36.68% YTD. Finally, in the Industrial Goods space, profit-taking activity in WAPCO dragged the index lower 0.61% w/w. The cement maker had recorded strong gains in recent weeks, and it appears some investors are seeking to take profit, evidenced by the 8.28% w/w drop in its share price. On the other hand, in the Oil and Gas space, although interest was tepid, the sector rose 0.30% w/w, thanks to gains in some fuel marketers on the exchange.

Fixed Income: The fixed income market was largely quiet this week with pockets of activity on select days. For the bonds space, the yield on benchmark bonds eased 5bps on average, driven by mild buy-side activity at across the benchmark curve. In the NTB saw some bearish activity which resulted in average yield rising 2bps w/w. Finally, in the OMO space yields declined 1bp on average on the back of slight bullish activity. 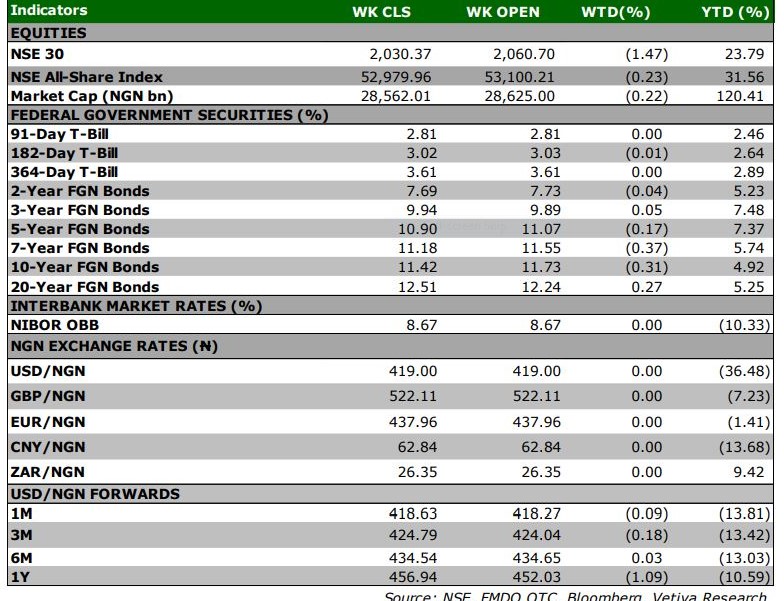 Equity market: Market sentiment improved in today’s session, however due to declines in MTNN and some banking names, market closed the week lower. To start the new week, we still expect recoveries in the banking space given this week’s 124bps decline.

Fixed Income: To open next week, we expect the bonds market to trade on a muted note, as investors focus on the outcome of the MPC meeting. Similarly, we anticipate tepid trading in the NTB segment ahead of the NTB auction on Wednesday.

Food inflation surged to 18.37% y/y in April amid demand-side pressure from religious festivities – Ramadan and Easter. We believe high cost of energy was the major driver of the uptick in food inflation. Available data from the bureau confirms that diesel prices have doubled over the past one year. This drove higher food inflation across 35 states of the federation, including the Federal Capital Territory (FCT). The transport passthrough masked the cooling impact of ongoing dry harvests in some northern markets. Core inflation, on the other hand, which has remained sticky within the past 12 months, rose to 14.18% y/y in April (Mar’22; 13.91% y/y).

We recall that the current trend of high and rising inflation began in September 2019, a month after the closure of all land borders. While the land borders were closed to curb smuggling, the food supply gap further expanded amid domestic supply-side hostilities – climate change, insecurity, COVID-19, and devaluation. We note that the impact of previous re-openings on inflation was muted as the ban on food imports (especially rice) remained in place. Thus, should the author-ities fully reopen the borders, this could help moderate inflation significantly.

In the meantime, however, the country is still faced with threats of higher ener-gy-induced inflation as the Independent Petroleum Marketers Association of Ni-geria (IPMAN) has warned that the refusal of relevant agencies to pay outstand-ing debts could lead to another fuel crisis. Should this risk crystallize, a new wave of fuel scarcity could boomerang on consumer prices. This risk could coun-ter the soothing effects of full border reopening. Thus, we expect headline infla-tion to rise to 17.44% y/y in May’22. We also raise our full-year estimate for FY’22 inflation by 200bps to 17.0% y/y (2021: 16.98% y/y).