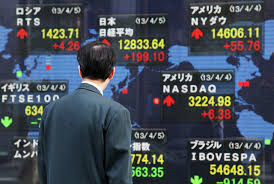 U.S. Treasury Secretary Steven Mnuchin had also raised market concerns by convening a crisis group amid the pullback in stocks.

S&P 500 emini futures were last down 0.6 percent, pointing toward a lower start for Wall Street when the U.S. market reopens after Christmas Day, when many of the world’s financial markets were shut.

Markets in Britain, Germany and France will remain closed on Wednesday.

Japan’s Nikkei, which slumped 5 percent the previous day, had a volatile session. It swerved in and out of the red, falling more than 1 percent to a 20-month-low at one stage, before ending the day with a gain of 0.9 percent.

“In addition to concerns toward the U.S. economy, the markets are now having to grapple with growing turmoil in the White House which has raised political risk ahead of the year-end,” said Masahiro Ichikawa, senior strategist at Sumitomo Mitsui Asset Management.

U.S. stocks have dropped sharply in recent weeks on concerns over weaker economic growth. Trump has largely laid the blame for economic headwinds on the Fed, openly criticizing its chairman, Jerome Powell, whom he appointed.