By Adeola Ajakaiye, in Kano
As African presidents and head of governments prepare for this year’s edition of the annual African Union summit, which is holding on the 5th and 6th of February, one of the historic events they will be addressing is the launch of a “year of nutrition” amid worsening levels of hunger and malnutrition that are now threatening sustainable development across the entire continent. 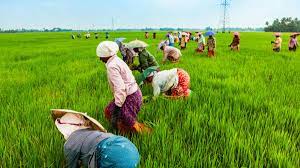 Oxfam, in a statement made available to Business. A.M. ahead of the summit, wants African leaders to boost funding for the agriculture sector, described as one sure way of fostering peace and security in the continent, as well as tackling growing inequality.

Peter Kamalingin, Oxfam’s pan-African programme director, said that the triple threat of the climate crisis, COVID-19, and conflict will require an extraordinary response from African leaders.

He noted with delight that many countries have already taken important steps, increasing investment in healthcare, providing shock responsive social protection systems, and empowering local, women-led, peace-building initiatives, adding, however, that such actions are still too few and far between.
“People are having to skip meals to feed their children, selling livestock and other assets, begging, pulling children out of school, or harvesting immature crops. “Over three million people in Somalia have recently migrated, in large part because of hunger, while millions of households in pastoralist communities in Chad, Benin, Niger, Mali, and Mauritania say they are having to sell more animals than they otherwise would to pay for more food,” said Kamalingin
One in five people (282 million) is now under-nourished and 93 million in 36 African countries are suffering extreme levels of hunger. Women and children are hit hardest. In sub-Saharan Africa, one in three children under five is stunted by chronic undernutrition, while two out of five women of childbearing age are anaemic because of poor diets.
“The UN estimates that food prices in sub-Saharan Africa are now 30-40% higher than the rest of the world, taking into account comparative levels of GDP per capita. Historical injustices, inequality, and wealth extraction have left generations of Africans poor and national economies indebted. Africa has stood last in line for Covid vaccines as the rich-world hogged supplies. The continent has also been hit hardest by climate change and is already heating at a faster rate than the global average of 1.2 degrees.
“While the deck seems stacked against Africa, there is a lot more than African leaders can do to improve food security. Instead of allocating 15% of national budgets to the health sector and 10% to agriculture, military spending across Africa rose by over 5% in 2020. African leaders must prioritize food, trade, and medicines over bullets, guns, and bombs,” said Kamalingin.
Twenty African countries are today facing insecurity and conflict including seven coups in the last year alone. In Ethiopia — the home of the AU — conflict has contributed to catastrophic levels of food insecurity in the Tigray, Amhara, and Afar regions.
“AU leaders must make better, more effective use of all existing mechanisms they have to prevent and resolve conflicts,” further said Kamalingin
Oxfam has reached nearly 12 million of the most vulnerable across 22 countries in Africa with lifesaving support including clean water, food, and cash. In addition, together with local partners, it works on gender, climate, and income generation programmes to help people rebuild their lives, demand their rights, and cope with the devastating impact of climate change.
The number of people unable to afford a healthy diet in Africa is one billion, or one-third of the global figure.
Businessamlive Website Stats