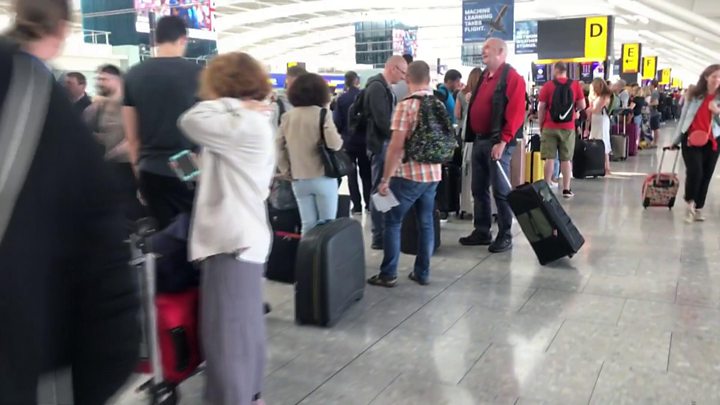 Some travellers who managed to reach their flights discovered when they reached their destination that their luggage had not been stowed.

The BBC reports that in the final throes of the summer break, the terminal at the UK’s second busiest airport was like “hell on earth”. The north terminal had all but ground to a halt by 05:00 on Tuesday. This followed the malfunction of the luggage conveyance system from check in to airside.

EasyJet was one of the worst affected airlines, according to the Beeb. The airline tweeted an urgent warning to passengers that extra time should be allowed for their check in. Some passengers had their boarding delayed by as much as five hours.

“Due to a baggage belt failure at @Gatwick_Airport‘s North Terminal, like other airlines, we are experiencing delays at bag drop and in the delivery of hold luggage to departing aircraft. This may result in some flights departing without all luggage stowed in the hold.”  — easyJet (@easyJet) September 3, 2019

The baggage hold chaos comes just two days after EasyJet was forced to apologize for delays caused by a “partial failure of French air traffic control systems”. One such delay led to an off duty pilot flying himself to his holiday.

On Sunday, the failure of a national communication system caused delays on the ground for many passengers hoping to fly. Some flights were delayed for up to three hours before being permitted to take off.

EasyJet also advised passengers that some luggage may not arrive at the destination at the same time as the scheduled flight. That spelled chaos for those who had managed to reach their gates and depart.

Writes the BBC, some passengers complained of “entire planes” empty of luggage. The Independent writes that “thousands” were left without luggage, although this has not been corroborated by other publications.

Mitigating, Gatwick airport apologised for the delays and the inconvenience. In a statement, a spokesperson said, “Unfortunately this is also causing delays to some bags reaching departing aircraft.

Passengers stranded at Gatwick were provided with a free transfer flight. Those without luggage had to wait for their bags to be flown to their destination. Photo: e

“Our engineers are working to resolve the issue as quickly as possible and we apologise for any inconvenience caused to passengers.”

Later, Gatwick tried to reassure passengers who had reached their destinations without luggage that bags would be repatriated by Tuesday or Wednesday. It is unclear whether passengers abroad have since been reunited with their belongings.

The cause of the baggage belt failure was not made public. The malfunction affected the bag drop and the delivery of hold luggage to departing aircraft.

We have contacted Gatwick airport for more details but have so far received no reply.

The cause of the malfunction was not known. Travellers who missed their flights due to the delays at the terminal were offered free transfers, according to the BBC. Some of these transfers were, however, hours later than the originally scheduled flights.

It is unlikely that those who travelled to destinations only to discover they were without their luggage will receive compensation. A baggage belt malfunction is considered by most insurers to be an “extraordinary circumstance”. It would therefore not warrant recompense.