The Bank of England said Britain faced its weakest economic growth in 10 years in 2019, blaming mounting Brexit uncertainty and the global slowdown, but it stuck to its message that interest rates will rise if a Brexit deal is done.
While other central banks have said they will hold off from raising borrowing costs, the BoE restated that gradual and limited rate rises lie ahead for Britain, as long as a no-deal Brexit in just 50 days’ time is averted.
“The fog of Brexit is causing short term volatility in the economic data, and more fundamentally, it is creating a series of tensions in the economy, tensions for business,” BoE Governor Mark Carney said in a speech after the Bank’s policymakers voted unanimously to keep rates at 0.75 percent as expected.
“Although many companies are stepping up their contingency planning, the economy as a whole is still not yet prepared for a no-deal, no-transition exit.”
It was possible that Brexit might not be fully “tied up in a nice package” by the end of March, Carney said, but he added that there was also upside for Britain’s economy if London and Brussels sign off on a deal.
Sterling initially dipped a quarter of a cent against the dollar but rebounded after Carney’s comments about the possibility of an economic rebound, trading largely unchanged on the day at $1.2925 by 1320 GMT.
The 10-year British government bond yield fell to its lowest level so far this year at 1.158 percent, down 5 basis points on the day, reflecting the BoE’s weaker outlook. 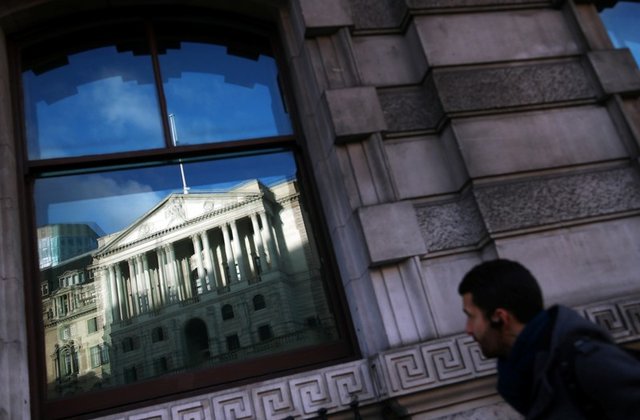 Short sterling interest rate futures indicated investors saw a flatter path ahead for interest rates.
“In the short term, the BoE is definitely more dovish,” James Smith, an economist with ING, said. “They are still subtly saying that their preference is to raise rates, but it all hinges on Brexit.”
Britain, the world’s fifth-largest economy, is due to leave the European Union on March 29, but Prime Minister Theresa May is holding out for more concessions from the bloc in an attempt to get her divided Conservative Party behind her plan.
The BoE has previously said a worst-case Brexit scenario, with no deal for a transition period and a sudden loss of confidence in Britain among foreign investors, could hammer the economy more than the global financial crisis did.
The central bank on Thursday slashed its 2019 economic growth forecast to 1.2 percent from its previous estimate of 1.7 percent, made as recently as November.
That represented the biggest cut in its projections since the period immediately after the 2016 Brexit referendum and put Britain on course for its weakest economic growth in the 10 years since the global financial crisis.
The BoE saw a fall this year in business investment and housebuilding, which have been weak in the run-up to Brexit, as well as a halving of the growth rate in exports, reflecting the global slowdown.
For 2020, the overall economic growth outlook was also cut to 1.5 percent from 1.7 percent before picking up to a stronger-than-previously expected 1.9 percent in 2021.
The weaker growth outlook came even as the Bank acknowledged that investors have scaled back their expectations on how much interest rates are likely to rise, a key factor underpinning its own projections.
The BoE said markets were now pricing in its Bank Rate rising to 1.1 percent by the end of 2021, compared with 1.4 percent at the time of its last forecasts in November.
But it sent a reminder to investors that rates might rise more quickly by saying it saw inflation in two years’ time at 2.1 percent, a touch above its 2 percent target.
Inflation was likely to fall below its target because of the global fall in oil prices in the coming months before bouncing back above 2 percent in a year’s time.
The main reason the BoE thinks underlying inflation pressures will grow is faster wage growth after Britain’s unemployment rate hit its lowest level in more than 40 years.
The BoE kept its wage forecasts largely unchanged with earnings rising by more than 3 percent a year over the next three years.
The bigger picture remains weak. Private-sector business surveys have suggested the economy has slowed to a crawl ahead of Brexit.
The BoE said on Thursday a survey it conducted of more than 200 businesses showed that half had begun to prepare for a no-deal Brexit, something a majority expected would cause the economy to shrink and unemployment to rise.
It repeated its message that it could either cut or raise interest rates after a no-deal Brexit, although many economists think it would be forced to help the economy with more stimulus, as it did after the Brexit referendum shock in 2016.
A rate rise by the BoE would contrast with moves by other central banks.
Last week the U.S. Federal Reserve signaled its three-year run of raising rates might be ending and earlier on Thursday, India’s central bank cut borrowing costs.
The European Central Bank has sounded more worried that the euro zone’s recovery has run out of steam. German industrial production data published on Thursday raised fears that Europe’s biggest economy might be heading for a recession.
Most economists polled by Reuters expect interest rates to rise later this year if Brexit goes smoothly.
But financial markets – factoring in the chance of a no-deal Brexit – see only slightly more than a 50 percent chance of an increase.