With the equities market opening the trading week on a bearish note, profit booking activities ensued, as investors sold off on stocks that gained in the last trading session. 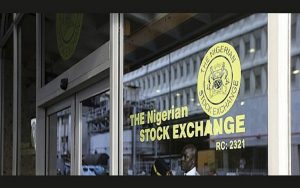 Meanwhile, market activity levels, however, were mixed as the volume of transactions rose 10.7 per cent and value of exchanged units tapered by 25.5 per cent. UBA led the chart for the most traded stock both in volume and value with 89.1m units (27.5%) and N730.8 million (22.9%) respectively. The market breadth was pegged at 1.13x, as seventeen (17) gainers outpaced fifteen (15) losers.

The NSE 30 Index decreased by 0.25 per cent to close at 1,459.61 points as against 1,463.33 points as on the previous day. Market turnover closed with a traded volume of 237.59 million units. Sterling and FCMB were the key gainers, while Ecobank and UBN were the key losers.

The Naira reversed gains on the street FX market and traded at N482 per dollar from N472 a dollar, staying N10 weaker, after easing off its year-high last week. At the I&E FX market, the naira remained stable at N395 per dollar. Most participants maintained bids between N384.50 and N404.91 per dollar

Given the low yield environment and an expected weakness of the bills on the back of the scheduled primary market auction (PMA) this week where the CBN will roll over NT-Bills maturities worth N50.93 billion, the NT-Bills secondary market closed on a flat note, with the average yield across the curve remaining unchanged at 0.12 per cent. Average yields across short-term, medium-term, and long-term maturities closed flat at 0.06 per cent, 0.09 per cent, and 0.18 per cent, respectively.

FGN bonds secondary market closed on a negative note Monday, as the average bond yield across the curve cleared higher by 11 basis points to close at 1.73 per cent from 1.62 per cent on the previous day. Average yields across short tenor and medium tenor of the curve widened by 14 basis points and 7 basis points, respectively, while the average yield across long tenor of the curve remained unchanged. The 27-APR-2023 maturity bond was the best performer with a decline in yield of 3 bps, while the 23-FEB-2028 maturity bond was the worst performer with an increase in yield of 62 basis points.