By Phanish Puranam and Ruchika Mehra

Improving how humans work with algorithms could simply be a matter of redesigning workflow. 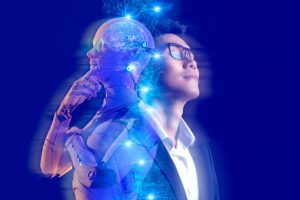 How should humans collaborate with artificial intelligence? This is a question of increasing urgency as AI becomes pervasive in the workplace. From screening job applications and chatting with customers to assessing investment portfolios, algorithms are working alongside us in myriad roles and organisation set-ups. But whether this collaboration is designed in ways that lead to trust and satisfaction – for us humans at least – is another story. 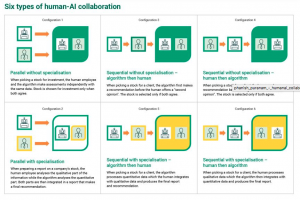 Respecting, rather than ignoring, human concerns over working with AI is not only consistent with humanistic values, as we noted in an earlier article, but also good for business. That’s why we ran the “Bionic Readiness Survey” to investigate what configurations of collaboration with AI algorithms humans are more or less likely to trust.

Based on responses from 257 participants so far (predominantly rank-and-file employees at large organisations in India), we found that people’s trust in AI and clarity about their own work role varied according to how their work is set up.

Not all configurations are equal

Respondents to our survey were randomly assigned to one of six different workflow configurations, which are illustrated in the graphic below. The scenarios (more information here) are permutations of whether employees work in parallel or in sequence, are specialised or not, and whether the final decision is taken by humans or algorithms.

The survey turned up three main findings. First, respondents indicated that they would be clearest about their own role if they worked in parallel with the algorithm and specialised in a different task (i.e. Configuration 2 in the above graphic). That’s not very surprising: role clarity tends to be directly related to how much independence a human employee has at work.

Second, respondents reported trusting the algorithm to almost the same degree across all configurations except in Configuration 3, in which human and AI work in sequence doing more or less the same thing, but with the human making the final decision. Unfortunately, this trust-sapping set-up is quite common in real life applications. Just putting the human in the role of second guessing the AI seems to lower human trust in the AI.

Third, how work is set up in organisations appears to affect employee trust as much as — in some cases more than — who they work with. In Configuration 3, for instance, our respondents indicated that they would trust an AI or a human colleague equally. In other words, if we compared Configuration 3 with one of the other configurations, we might erroneously conclude that humans trust AI less than they trust human colleagues.

Get the configuration right

Put simply, our results to date show that human trust in AI as a colleague may be too broad a line of inquiry. A more fruitful one might be the optimal set-up for human-AI collaboration. Whereas past research on human-AI collaboration tends to focus on the reliability of the algorithm, ours is perhaps the first to examine the role of workflow. And it appears that human distrust of AI at work may be down to workflow design rather than human vs. machine rivalry.