Brass Fertilizer and Petrochemical Company Limited (BFPCL), funders of incoming Nigeria’s first methanol plant, with capacity to deliver 10,000 tonnes per day (tpd) methanol products to the export and local markets, at the weekend in Abuja (on Friday 29 January) took the final investment decision (FID) on the $3.6 billion plant to be built at Odioma, Brass local council of Bayelsa State. 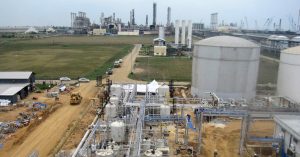 The BFPCL is an incorporated entity owned by the Nigerian National Petroleum Corporation (NNPC), DSV Engineering, and the Nigerian Content Development and Monitoring Board (NCDMB).
At construction, the project known as ‘integrated gas processing and methanol plant,’ would engage up to 30,000 people, while on completion and eventual take-off by 2024, it would employ some 5,000 permanent workers, according to Mele Kyari, the group managing director, Nigerian National Petroleum Corporation (NNPC). He said the NNPC is fully supporting the project to fruition, as it would massively absorb 270 million standard cubic feet of gas to produce 10,000 tonnes per day methanol.
It is part of the Brass Gas Hub initiative approved by the president, Muhammadu Buhari last year, meant to evacuate some 14 trillion cubic feet (tcf) of gas deposits in the Brass area.
“The NNPC would do everything within its powers to ensure the timeous completion of the $3.6bn Integrated Gas Processing and Methanol Plant in Odioma, Brass Island, Bayelsa State,” said Kyari at the FID signing in Abuja on Friday.
In 2017, BFPCL secured an initialled gas sales and purchase agreement (GSPA) with the Shell Petroleum Development Company (SPDC) JV for a 25-year supply of 270 million standard cubic feet per day (mmscf/d) rich gas to the project. The integrated project is estimated to cost about $3.6 billion; and is expected to deliver 10,000tpd methanol products to both local and export markets.
Ben Okoye, the executive vice-chairman of BFPCL, said, the signing of the FID was an affirmative vote and consent by the Board to construct the plant.
He explained that with a production capacity of 10,000 tonnes per day, the facility would be the largest methanol plant in Africa, with a huge potential to provide gainful employment to many youths both at the construction and operational stages.
Okoye informed that based on lessons learnt from the historic chequered relationships between host communities and oil and gas companies, the project would allow for host communities to have equity shareholding participation, to give them a sense of belonging.
Kennie Obateru, the group general manager, group public affairs division, NNPC, in a statement quoted Kyari as saying that the facility is the first methanol plant in Nigeria. He said the NNPC was pleased with the current efforts by the federal government to provide value for Nigeria’s gas resources.
Kyari described the FID as one of the most significant FIDs in recent times, as the project was in tandem with the earlier declaration by Timipre Sylva, minister of state for petroleum resources that “2020 was the Year of Gas, and 2021-2030 as the Decade of Gas.
Usman Yusuf, the BFPCL board chairman, who is also the NNPC chief operating officer, gas & power, informed that a lump sum turnkey engineering, procurement and construction (EPC) contract has been awarded to the China Tianchen Engineering Corporation (CTEC) while TATA Consulting Engineers are providing the project management consultancy for the delivery of the plant in 2024.
Sylva, the minister of state for petroleum resources, and the alternate chairman of the NNPC board, said the FID marked yet another milestone in the ongoing efforts to monetize and add value to Nigeria’s abundant natural gas endowments.
He noted that in July 2020, President Muhammadu Buhari approved the development of the Brass Gas Hub, with the sole aim of aggregating and monetizing all stranded gas in the Brass area which amounts to over 14 trillion cubic feet.
“Today we are witnessing the signing of the FID of Phase 1 of Brass Gas Hub by the promoters of this laudable project. The project is expected to have very significant economic impact on the country, including but not limited to support for gas-based industries, revenue generation, import substitution for the methanol needs of the country that is currently imported 100 per cent, among others,” the minister said.
He assured BFPCL of government’s support, and called on the company to ensure timeous completion of the project.