Although marginal, and below the third-quarter growth of 4.03 percent, data just released by the Nigeria’s National Bureau of Statistics (NBS) shows that Nigeria’s real gross domestic product (GDP) grew 3.98 percent year on year to N20.33 trillion in the fourth quarter of 2021. 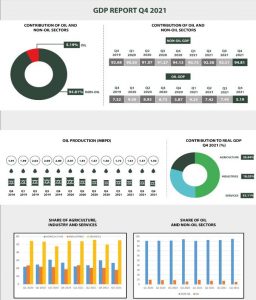 It was a bit short of the 4.03 percent year on year reported in Q3 of 2021, and brought the aggregate annual growth to above three percent for the first time in seven years at 3.40 percent after it reached 6.22 percent real growth in 2014.

According to the report, the performance in real terms shows a sustained positive growth for the fifth quarter since the recession witnessed in 2020 when output contracted by -6.10 percent and -3.62 percent in Q2 and Q3 of 2020 under the Covid pandemic. Also, the growth indicates a steady economic recovery accounting for annual growth in 2021.
The Q4 2021 growth rate was higher than the 0.11 percent growth rate recorded in Q4 2020 by 3.87 percent points, but lower than 4.03 percent recorded in Q3 2021 by 0.05 percent points.

Nevertheless, quarter on quarter, real GDP grew at 9.63 percent in Q4 2021 compared to Q3 2021, reflecting a higher economic activity than in the preceding quarter.
In the quarter under review, aggregate GDP stood at N49.27 trillion in nominal terms. This performance is higher when compared to the fourth quarter of 2020 which recorded aggregate GDP of N43.56 trillion, indicating a year-on-year nominal growth rate of 13.11 percent.
Drivers to the growth come not only from the reopening of economic activities in the country but from the oil sector which recorded real growth of -8.06 percent year on year in the quarter, indicating an increase by 11.71 percent points relative to the rate recorded in the corresponding quarter of 2020.
Consequently, the oil sector contributed 5.19 percent to total real GDP in Q4 2021, down from figures recorded in the corresponding period of 2020 and down compared to the preceding quarter, where it contributed 5.87 percent and 7.49 percent, respectively. Nevertheless, the sector contributed 7.24 percent to real GDP in 2021.
Also, the non-oil sector grew by 4.73 percent in real terms during the reference quarter. This rate was higher by 3.05 percentage points compared to the rate recorded in the same quarter of 2020 and 0.71 percentage point lower than the third quarter of 2021. This sector was driven in the fourth quarter of 2021 mainly by agriculture (crop production); trade; information and communication (telecommunication); and financial and insurance (financial institutions), accounting for positive GDP growth.
In real terms, the non-oil sector contributed 94.81 percent to the nation’s GDP in the fourth quarter of 2021, higher than the share recorded in the fourth quarter of 2020, which was 94.13 percent, but higher than the third quarter of 2021, which was recorded as 92.51 percent. The annual contribution in 2021 was 92.76 percent.
Businessamlive Website Stats