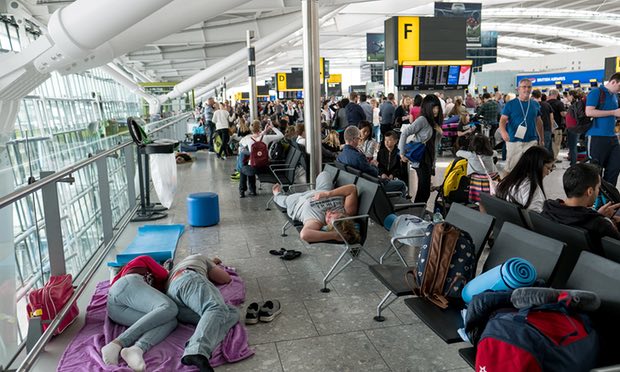 British Airways could face a bill of at least £100m in compensation, additional customer care and lost business resulting from an IT meltdown that affected more than 1,000 flights over the weekend, Guardian is reporting, as all the airline’s flights from Heathrow and Gatwick were grounded on Saturday.

Though, services resumed on Sunday 28th, but cancellations and delays persisted with about 200 BA flights in and out of Heathrow cancelled on the day, according to Guardian calculations.

There were no cancellations at Gatwick but some passengers experienced delays.

The challenge was presumed to have been as a result of  a power supply failure, and there is no evidence of a cyber-attack as many think, the airline said.

In a video posted on YouTube, Alex Cruz, chief executive of BA, said that all the IT systems were not yet restored. “Many of our IT systems are back up today. All my British Airways colleagues on the ground and in the air are pulling out all the stops to get our operation back up to normal as quickly as we possibly can, we’re not there yet.”

“I know this has been a horrible time for customers. Some have missed holidays, some have been stranded on aircraft, some separated from bags and some stuck in long queues while they have waited for information. On behalf of everyone at BA I want to apologise for the fact you’ve had to go through these very trying experiences,” said Cruz.

As hundreds of passengers remained stranded, the GMB union blamed job cuts at BA for the IT problems which were thought to relate to a power outage.

Mick Rix, GMB national officer for aviation, said:“This could have all been avoided. BA in 2016 made hundreds of dedicated and loyal IT staff redundant and outsourced the work to India. BA have made substantial profits in for a number of years, and many viewed the company’s actions as just plain greedy.”

Both Gatwick and Heathrow advised passengers to check the status of their flights after terminals became congested with travellers hoping to get away for the long weekend and half-term school holiday. BA was asking passengers not to turn up until 90 minutes before their flights because of the level of congestion at Heathrow.

On Sunday morning, Welsh international table tennis player Chloe Thomas, whose 7.30am flight from Heathrow to Germany for the World Table Tennis Championship in Düsseldorf was cancelled at the last minute, described chaotic scenes.

“It’s chaos, people are running about all over the place trying to rebook,” she told Press Association. “There’s no one to help, no leadership. There are lots of people everywhere. There’s nowhere to sit, so people are just lying on the floor, sleeping on yoga mats.”

She said airport staff had handed out mats, as well as thin blankets, for people who were stuck there overnight. She added that one of the shops had sold out of food. Passengers faced long lines to check in, rebook or find lost luggage.

James Walker, chief executive of free flights compensation claim site Resolver, said BA handled about 120,000 passengers a day in and out of Heathrow and Gatwick alone, indicating a bill of close to £50m for delays of more than three hours under EU-backed compensation rules.

About half of those passengers were likely to be entitled to meals and accommodation while waiting for delayed flights and a number will have sought a refund or decided to avoid using BA as a result of a “loss of trust”.

BA has also pledged to reunite hundreds of thousands of items of luggage caught up in the delays with passengers via a free courier service adding further to costs.

Walker said there was no question that BA would have to pay out compensation under the EU scheme which demands payments for flights delayed by at least three hours as a result of reasons within the airline’s control.

“This is not like an ash cloud or traffic controllers’ strike that can’t be predicted. The computer system breaking down is within its control. BA is going to have to pay out and it looks like its costs will be north of £100m.”

Last year, the US airline Delta said it lost $100m after the shutdown of power to its data centre because an equipment failure led to delays.

John Strickland, director of independent transport consultancy JLS Consulting, said it was likely that BA would face a “significant financial impact” as its problems looked set to continue into this week.

BA indicated it was expecting continued disruption as its website said customers due to fly on Monday and Tuesday could rebook for dates up to November this year, even if their flights were operating.

Problems remain with the airline’s IT systems, including its customer call centres and website as well as operations planning. It also takes time for BA to ensure planes and staff are in the right place. Crew working patterns are also governed by strict regulations on rest and working hours.

“It’s the magnitude and scale of the problem. Even if BA’s IT systems were fully operational now it will take some days to fully restore a normal flying programme.”

Strickland said Heathrow was worst affected because it is the biggest BA hub and handles more long haul flights.

BA was unable to respond to queries about the financial impact or the number of flights cancelled on Sunday but a spokesman said: “We would never compromise the integrity and security of our IT systems.”