BUA Cement Plc,one of Africa’s leading cement giants, has begun distributing 1,000 three-seater desks worth N32 million to schools across Sokoto State as part of its continuous commitment to supporting its host community.

In his remarks during the distribution to one of the schools, Sada Sulaiman, head of administration and human resources, BUA Cement,disclosed that 13 schools including BUA host community schools and others within the State are to benefit from the gesture. 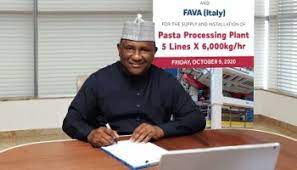 Also speaking, Abdulganiyu Yusuf, director of administration and sales, BUA Cement said that the initiative is to appreciate the Sokoto State government’s policy for declaring a state of emergency on education.

“We are truly part and partners in ensuring the success of government policies and programmes. We are distributing no fewer than 1,000 three-seater desks, worth N32 million, to sustain a conducive learning environment for our pupils,” he said.

As such, he urged benefiting schools to put the gesture into good use to enable the success of the company’s target.

Speaking on behalf of the beneficiaries,Abubakar Chika, secretary to the Wamakko local

government area, appreciated BUA Cement plc for the donation. He described the gesture as a wake-up call to all industries and business communities across the state.