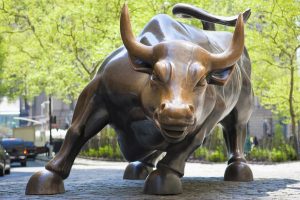 However, the activity level declined as volume and value traded fell by 40.8 per cent and 48.9 per cent to 257.6 million units and N3.5 billion respectively. The most traded stocks by volume were Zenith Bank (40.6million units), Transnational Corporation (23.2million units) and Access Bank (20.9million units), while Zenith Bank (N999.3million), MTN (N686.1million) and GTB (N242.0million) led by value.

Similarly, the performance across sectors was bullish as 4 of 6 indices closed northward while the industrial goods and AFR-ICT indices closed flat. The oil & gas index led gainers, up 2.8 per cent due to bargain hunting in Mobil Plc (+9.9%) and Oando (+9.2%). Similarly, the insurance and consumer goods indices rose 1.0 per cent and 0.6 per cent respectively, owing to buying interest in WapicPlc (+7.3%), AIICO Insurance (+5.3%), International Breweries  (+9.6%) and Guinness Plc (+7.2%). Finally, price appreciation in GTB (+2.6%) marginally drove the banking index higher by 2 basis points.

The NSE 30 Index marginally increased by 0.08 per cent to close at 1,483.78 points as against 1,482.56 points the previous day. Market turnover closed with a traded volume of 167.03 million units. 11 Plc (Mobil) and International Breweries were the key gainers, while UBN and Fidelity Bank were the key losers.

The naira accelerated its decline against the dollar by N7 to trade at N494 per dollar on Thursday, bringing the week to date depreciation to N11 from N483 per dollar in the parallel market; while at the I&E FX market, the naira remained stable at N393.25 per dollar. Most participants maintained bids between N383.00 and N395.00 per dollar.

Despite the low yield environment prevailing in the NT-Bills market, investors were willing to buy up to N445.94 billion due to the abundant system liquidity as the NT-Bills secondary market closed on a flat note, with the average yield across the curve remaining unchanged at 0.10 per cent. Average yields across short-term, medium-term, and long-term maturities closed flat at 0.06 per cent, 0.09 per cent, and 0.13 per cent, respectively.

With the expected bullish sentiment in the market as investors seek opportunities to re-invest proceeds from the OMO bills maturities, owing to relatively better yields, the FGN bonds secondary market closed on a positive note on Thursday, as the average bond yield across the curve cleared lower by 1 basis point to close at 1.61 per cent from 1.62 per cent on the previous day. Average yields across short tenor and long tenor of the curve compressed by 1 basis point and 7  basis points, respectively; while the average yield across medium tenor of the curve advanced by 10  basis points.