The Central Bank of Nigeria (CBN) has introduced a cash swap programme in partnership with super agents and deposit money banks (DMBs) to foster the circulation of the redesigned N100, N500, and N200 notes across the 774 local government areas in the country.

According to the circular, the cash swap programme will be  effective from Monday, January 23,2023.

The CBN explained that the initiative is aimed at enabling citizens in rural communities, underserved areas, or those with limited access to formal financial services to exchange old naira notes for redesigned notes, considering that the old notes cease to be in circulation by January 31.

The circular stated that the old notes can be exchanged for the newly redesigned notes and/or the existing lower denominations of N100, N50 and N20, etc, which remain legal tender.

It further stated that under the new initiative, agents can only exchange a maximum of N10,000 per person. 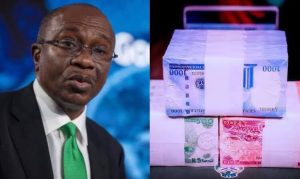 To promote financial inclusion, the CBN said the service is also available to anybody without a bank account.

It said agents may, on request, instantly open a wallet or account, leveraging the CBN tiered know your customer (KYC) framework.

This, according to the central bank, will ensure that the unbanked citizens are able to exchange or deposit their cash seamlessly without taking unnecessary risk or incurring undue cost.

The CBN also directed agents to sensitise customers on opening wallets/bank accounts and the various channels for conducting electronic transactions.

“Designated agents are eligible to collect the redesigned notes from DMBs in line with the revised cash withdrawal limit policy,” the circular added.

The new policy also grants agents permission to charge cash-out fees for the cash swap transactions. However, they are prohibited from charging any further commissions to customers for this service.

Agents were also directed to render weekly returns to their designated banks regarding the cash swap transactions. Also, DMBs shall in turn render the same to the CBN on a weekly basis.

“Principals (super agents, MMOs, DMBs) shall be held accountable for their agents adherence to the above guidelines,” the circular added.

CBN also assured that cash swap agents would be readily identifiable in all local governments, particularly those in the rural areas.