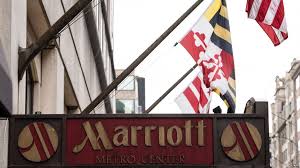 eft clues that they were working for Chinese government intelligence gathering operation.
Marriott  discovered that a hack that began four years ago had exposed the records of up to 500 million customers in its Starwood hotels reservation system.
Private investigators looking into the breach have found hacking tools, techniques and procedures previously used in attacks attributed to Chinese hackers, said three sources who were not authorized to discuss the company’s private probe into the attack.
That suggests that Chinese hackers may have been behind a campaign designed to collect information for use in Beijing’s espionage efforts and not for financial gain.
China was pointed out as the lead suspect in the case, they cautioned it was possible somebody else was behind the hack because other parties had access to the same hacking tools, some of which have
previously been posted online.
If investigators confirm that China was behind the attack, that could complicate already tense relations between Washington and Beijing, amid an ongoing tariff dispute and U.S. accusations of Chinese espionage and the theft of trade secrets.
However China firmly denied  all forms of cyber attack and cracks down on them in accordance with law. Chinese ministry of foreign affairs spokesman Geng Shuang  said that if offered evidence the relevant Chinese departments will carry out investigations according to law.