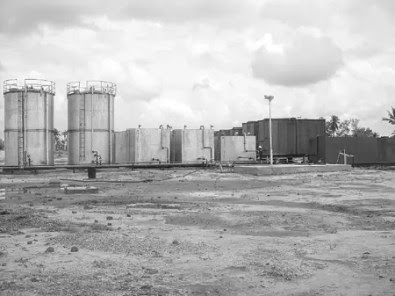 Carbon emission is one of the leading threats to the world’s climate safety.

The analysis, by Richard Heede at the Climate Accountability Institute in the United States, the world’s leading authority on big oil’s role in the escalating climate emergency, evaluates what the global corporations have extracted from the ground, and the subsequent emissions these fossil fuels are responsible for since 1965 – the point at which experts say the environmental impact of fossil fuels was known by both industry leaders and politicians.

The top 20 companies on the list have contributed to 35% of all energy-related carbon dioxide and methane worldwide, totalling 480bn tonnes of carbon dioxide equivalent (GtCO2e) since 1965.

Those identified range from investor-owned firms household names such as Chevron, Exxon, BP and Shell – to state-owned companies including Saudi Aramco and Gazprom.

Chevron topped the list of the eight investor-owned corporations, followed closely by Exxon, BP and Shell. Together these four global businesses are behind more than 10% of the world’s carbon emissions since 1965.

Twelve of the top 20 companies are state-owned and together their extractions are responsible for 20% of total emissions in the same period. The leading state-owned polluter is Saudi Aramco, which has produced 4.38% of the global total on its own.

Michael Mann, one of the world’s leading climate scientists, said the findings shone a light on the role of fossil fuel companies and called on politicians at the forthcoming climate talks in Chile in December to take urgent measures to rein in their activities. 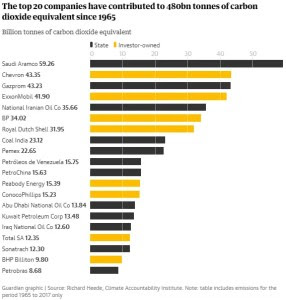 “The great tragedy of the climate crisis is that seven and a half billion people must pay the price – in the form of a degraded planet – so that a couple of dozen polluting interests can continue to make record profits. It is a great moral failing of our political system that we have allowed this to happen.”

The global polluters’ list uses company-reported annual production of oil, natural gas, and coal and then calculates how much of the carbon and methane in the produced fuels is emitted to the atmosphere throughout the supply chain, from extraction to end use.

It found that 90% of the emissions attributed to the top 20 climate culprits was from use of their products, such as petrol, jet fuel, natural gas, and thermal coal. One-tenth came from extracting, refining, and delivering the finished fuels.

The Guardian approached the 20 companies named in the polluters’ list. Seven of them replied. Some argued that they were not directly responsible for how the oil, gas or coal they extracted were used by consumers. Several disputed claims that the environmental impact of fossil fuels was known as far back as the late 1950s or that the industry collectively had worked to delay action.