Most farmers in the developing rural areas of Nigeria are still predominantly subsistence oriented . Efforts to transform them into commercial operators has seen little progress , as low incomes, unstable sources of livelihood and insufficient funding have  been identified as o factors inhibiting the performance of the agricultural sector in Nigeria.

This, according to analysts, has affected the sector adversely in the drive towards ensuring food security, employment generation that will result in wealth creation. 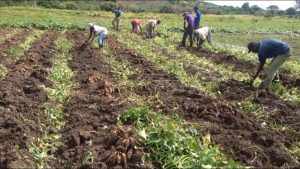 In order to overcome the situation and improve the performance of the sector, experts in the sector have identified cluster farming as an economically viable practice to sustain small, limited resource, and socially disadvantaged farmers with their agricultural operations

Cluster farming, according to agronomists,  is the coming together of agricultural growers in an area to form a group so as to synergistically enjoy one economic benefit or another, or collectively share a burden which if faced individually may be an obstacle to their profitability. This method of farming also engages small growers called satellite farms, who form clusters around big farms known as “Hub Farms”, for the benefit of research, innovation or availability of modern farming techniques or equipment.

Some of the benefits attributed to the cluster farming system include,sharing of recent and expensive research and agricultural technology;access to cheap farming inputs such as fertilizer, pesticides and herbicides; marketing and distribution chain; as well as extension services and above all, increased productivity.

The International Trade Centre (ITC), in its assessment of the farming practice observed that  agricultural clusters are increasingly being recognized as an efficient way to develop and stabilise agriculture and agro-industry and to create an environment that improves the competitiveness of agribusiness, particularly small medium-scale companies and concentrate their efforts to achieve competitiveness and performance targets.

The Food and Agriculture Organisation (FAO) also recommends cluster farming as one of the sustainable methods of supporting agribusiness and agro-industrial development.

“There is a need for governmental bodies to improve the system through comprehensive and participatory monitoring, evaluation and supervision,” FAO advised.

The United Nations consultant noted that farming should be regarded as not just an occupation but a business whose value chain needs more investments, thus the need to create partnerships with external parties and the government to enlarge its value chains.

Yinka Adesola, an organic farmer and founder of  Farmvilla Resource Centre, Saki East Local Government in Oyo State, defined cluster farming as a farming engagement or activity that involves  farmers growing the same type of crop and operating in the same vicinity, area or close by location.

Highlighting the benefits of cluster farming to agricultural development, Adesola noted that the farming process offers the group of farmers the following advantages:

-Diffusion of innovation and easier access to research,market and technical information.

-Enables access to quality inputs and certifications which are usually quite expensive and involve a higher risk for farmers operating  individually.

-Easier access to loans and purchase of machineries as they can readily meet the criteria involved.

-Lowers cost of production as well as  transportation costs.

Solomon Samson, chief executive officer, Agriwealth Integrated Farms,Ota, Ogun State, defined cluster farming as small holder farmers coming together to form a group so they can access and leverage on different inputs and to avoid the risks involving agribusiness.

Samson pointed out that most smallholder farmers cannot afford machinery like tractors,plowing machines, and the likes. As a result, he noted that coming together will minimise the cost expenditure of each farmer.

Speaking on how cluster farming works, he explained that it is just like a cooperative society that involves a group of farmers for the purpose of development and doing things together.

On how cluster farming can help the present state of the agricultural sector, he explained that it is one of the solutions to the current agribusiness activity in Nigeria.

He noted that If farmers had engaged in cluster farming before the flood,it would have been easier because there will be a centralised treasury where they could get the needed finance to sustain production. He noted further  that cluster farming makes it easier for farmers to get inputs,knowledge via training, empowerment and access to funds.

According to him, most financial organisations that give out funds do not give to individual farmers, but prefer to give to a cluster.

Speaking on the challenges in cluster farming, he observed that one of the major challenges is “distrust among farmers”.

” If we come together to form a cluster and we are doing the same thing,if a farmer is thriving and others are not recording the same level of success, it could lead to issues such as jealousy and unhealthy competition which is a disadvantage,” he said.

The chief executive officer, Agriwealth Integrated Farms, also identified important facts to consider when establishing or joining a cluster farming group, which include:

-An ideal location and group of professional farmers.

– Official positions where people are assigned various tasks relating to the cluster’s objectives.