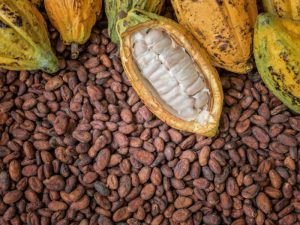 Commenting on cocoa’s outstanding bullish performance, Michael Martins, portfolio manager at AFEX, noted that the crop benefitted from a rise in chocolate demand and consumption in the international market following lockdown relaxations in Europe and other high consuming regions of the world.
Martins also attributed the price surge to the sustained rainfall seen this year which has made it a bit difficult for cocoa producers to  dry their crops, limiting supply at a period demand is on an upward trend.
“For the few volumes of cocoa that are available in the market, there is a whole lot more demand than there is current supply available in the market. So, prices would tend to rise significantly over the coming months,” he said.
The AFEX portfolio manager further averred that the high demand for locally produced cocoa is expected to keep prices positive till the close of the year. He, however, noted that the crop is likely to record a decline towards the second quarter of 2022.
The latest Afex Commodities Index Composite- a collection of key commodities indexes averaged together to represent overall market or sector performance – averaged 427.34 points between October 12 to 18, unchanged from the same figure recorded the previous week.
However, total value traded during the week under review was N226.37 million, marking a 366 percent increase compared to N48.59 million the previous week. Also, the number of contracts traded moved 17.89 percent higher at 1,015,051 contracts against 53,743 contracts week-on-week.
Total number of deals for the week in focus was negative as a total of 36 deals were recorded, an 18 percent decline from 44 deals transacted the week prior.
Businessamlive Website Stats