Global: Global markets closed the week in the red, following the release of economic data from major economies. Markets in the USA recorded losses following a report that showed GDP declined more than expected in the last quarter. At the time of print, the Dow Jones index was down 2.30% w/w, while the Nasdaq and S&P indices lost 4.99 % and 0.16% respectively. In Asia, major markets in the region closed lower w/w, as recession concerns weighed in on investors’ sentiments. The Kospi index lost 2.59%, while the Nikkei-225 was down 2.10% w/w. Moving to the European region, stocks also traded lower this week, following fears of a recession, after EU inflation data came in at a record high number (8.60%). The French CAC lost 2.59% w/w, while the German Dax and London FTSE-100 also lost 2.57% and 0.15% w/w respectively. 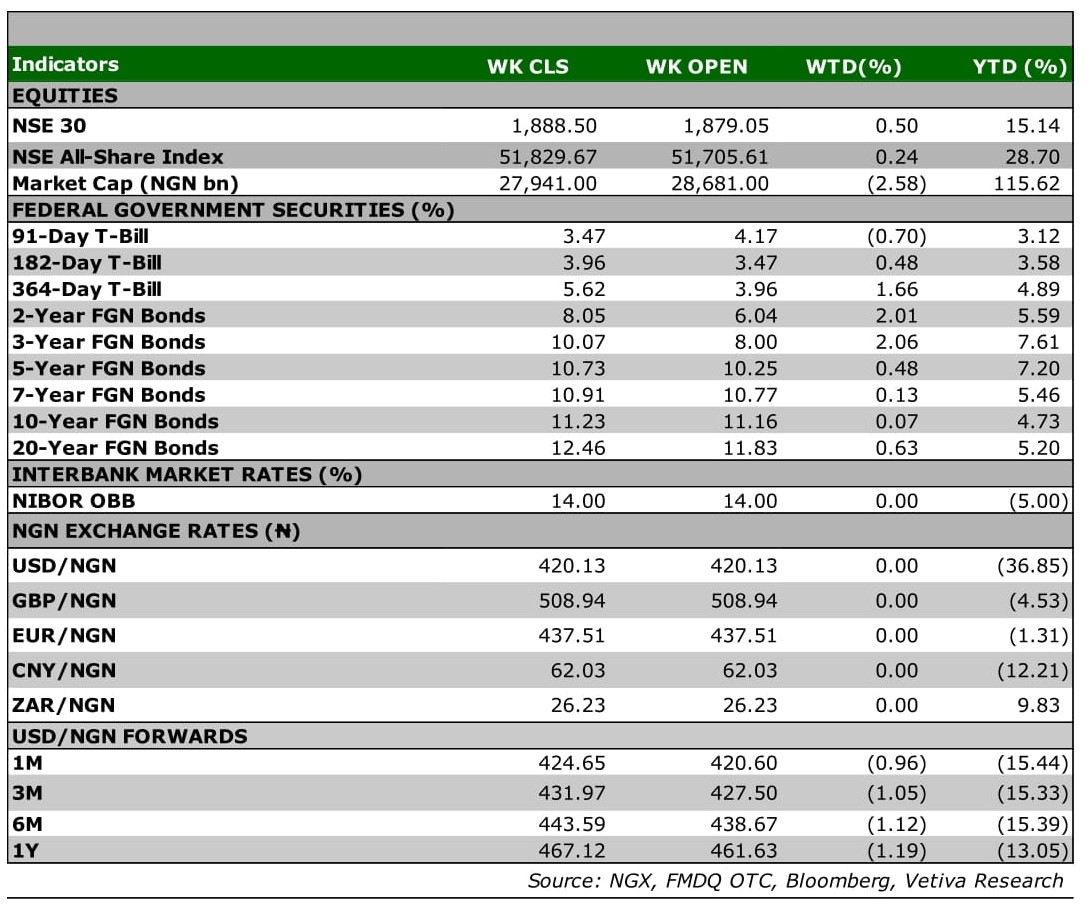 Domestic Economy: Nigeria paid $300 million for a five-year diaspora bond due on June 27, 2022, according to the DMO. The repayment will reduce the total external debt stock to $39.6 billion. Diaspora bonds provide the government with lower-cost financing from nationals abroad, making it a more sustainable source of funding than Eurobond. It also works well as a viable alternative considering the risk off sentiments in the international market.

Equity market: Market activity started off quiet, as we saw minimal trades in the first trading session of the month. We anticipate further mixed trading sessions next week as investors continue to trade cautiously amid some bargain hunting activities.

Fixed Income: Next week, we expect the bond market to trade on an active note ahead of coupon inflows of c.₦175 billion. Meanwhile, the NTB segment is expected to trade in line with system liquidity.

According to the Q1’22 GDP report from the National Bureau of Statistics, the manufacturing sector’s contribution to GDP grew to 10.2% from the previous year’s comparable (9.9%). Expectedly, the growth was steered by volume growth from the Food, Beverage & Tobacco segment which improved by 10% y/y in the period (Q1’21:7%) while chemical and pharmaceutical products (which covers the Home & Personal Care segment) grew c.7% y/y. We believe that the improved volume turn out reflects renewed demand strength from improved economic activities. Admittedly, whilst PMS costs have remained subsidized, with the evident inflationary trend so far this year, especially with the hike in electricity tariff, we believe that consumer wallets have not fully recovered from the pandemic. However, looking at Q1 volumes and revenue performances across our coverage companies, we note that demand has remained supportive of this robust performance. Nonetheless, we still ascribe some of the growth to expanding capacity projects across various players in the sector as well as the continued successful implementation of product re-sizing strategies that have targeted value consumers across the FMCG market. In addition, the impact of pricing on topline growth so far cannot be overlooked, given the unanimous price increases witnessed in the sector. Before now, producers had room for only subtle price changes, which were an attempt to cover some of the damage to their margins. However, with the swift escalations in raw material costs, it became impracticable to maintain price points, resulting in stronger pricing across board. Consequently, the mix of volume expansion and price improvement led to an average topline growth of 32% across our coverage in the Q1 period.

Despite rising inflationary pressures and the impact on consumer wallets, we expect volumes to thrive in the second half, underpinned by an expected increase in spending both from expanding economic activities and election spending. That said, with the re-opening of the four remaining land borders, we expect imported competition to resurface and impact volumes albeit at a slowed pace. We base this expectation on more stringent border controls as well as FX sourcing challenges facing importers. In terms of pricing, whilst we expect the current pricing scenario to remain sustained for the rest of the year, we do not overrule supplementary price increases, should costs escalate further during the year. Combining our price and volume forecasts, our outlook for revenue across the sector remains upbeat for the rest of the year.

On the other hand, we still see a slow year for consumer discretionary companies as the heightened pressure on consumer wallets will ensure that customers defer big-ticket purchases in favour of necessities, given the state of consumer wallets and pricing levels. Moreso, given the recent decision by the MPC to raise MPR to 13%, the general expectation is that interest rates would start to see a lift which could induce more savings and reduce spending on these items.