Copper extended its rebound to close the week on a bullish platform as fears of a global recession eased, while investors shifted concerns on low inventories and impending supply tightness.
Three-month copper CMCU3 on the London Metal Exchange (LME) was up 0.6 percent to $7,774 a tonne, building on the previous session’s 0.7 percent increase. 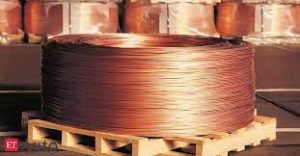 In a similar trend, the most-traded September copper contract on the Shanghai Futures Exchange SCFcv1 gained 1.5 percent to 60,310 yuan or $8,938.66 a tonne.
Commodity analysts noted that the red metal has recovered from three days of losses prompted by weak global factory data amid flaring U.S.-China tensions after Nancy Pelosi, the U.S. House of Representatives speaker visited Taiwan.
Meanwhile, Chinese authorities have announced an increase in stimulus spending into the economy and establishment of metals-intensive infrastructure projects to lift economic growth, a major boost for copper prices.
Gianclaudio Torlizzi, partner at consultancy T-Commodity in Milan, Italy, noted that though Europe is in a struggle to curtail recession, the Chinese economy has been in a stabilising mode, allaying fears of a global recession which would have resulted in a crash in the valuation of copper and other base metals.
“The tightness of supply is much higher than two years ago, so my bet is that there’s the risk of a squeeze in the fourth quarter,” Torlizzi said.
He added that metals consumers who have been waiting for lower prices will scramble to restock when they realise prices have stabilised.
In another development, market data showed that most LME inventories are at historically low levels as copper stocks stood at 128,600 tonnes, having shed nearly 30 percent since mid-May.
For other metals, LME aluminium gained 1.4 percent to $2,437.50 a tonne, nickel was up 0.6 percent to $22,350 and tin  added 0.8 percent to $24,750.
On the flipside, zinc was down 0.4 percent to $3,435.50 a tonne, while lead lost 0.3 percent to $2,040 a tonne.