As Covid-19 pandemic hits the global economy, with certain continents and regions of the world expected to receive more knocks, the African Development Bank (AfDB) estimates that Africa, could lose $173.1 billion in gross domestic product (GDP) in 2020 and $236.7 billion in 2021 because of the pandemic. 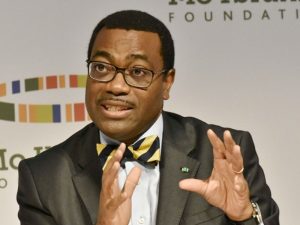 This emerged as the 55th annual meetings of the AfDB and the 46th meetings of the board of governors of the African Development Fund (ADF) began Wednesday in Abidjan, Côte d’Ivoire. This year’s meetings being held virtually due to restrictions occasioned by the COVID-19 health crisis are aimed at a renewed commitment to economic resilience in Africa.

The restrictions and strict lockdown measures imposed at the start of the virus crisis, some of which are being gradually relaxed, have resulted in mass closures of businesses and millions of job losses. The aim is to soften the impact of the anticipated recession.

Africa, a continent of over 1.2 billion people with a combined GDP of $3 trillion, has most of its 55 nations highly dependent on primary commodities, especially oil, for their foreign revenues. Today, these commodities are witnessing their worst demand drop in history. Worst hit is crude oil where Africa’s upstream spend is down by $14 billion, while foreign direct investments (FIDs) into the continent’s LNG is down from 22 to only three, a report by Africa Oil Week (AOW) said.

“With the pandemic, Africa has lost over a decade of gains of economic growth. Africa’s

recovery will be long and difficult. Now we must help Africa to build back, boldly, but smartly, paying greater attention to quality growth: health, climate and the environment,” said Akinwunmi Adesina, AfDB Group president, while addressing the audience.

He said back in April, the Bank reacted swiftly to the pandemic, with a series of bold measures to support its regional member states to help cushion them against the impacts of the outbreak. “One example was the launch of the COVID-19 Response Facility of up to $10 billion. The response, like the crisis, is now on a continental scale. From the north to the south of the continent, the Bank has provided massive support to strengthen the resilience of regional member states. The Bank has provided support worth $22 million to regional bodies such as ECOWAS in West Africa, to strengthen the health systems of low-income countries, and to CEMAC in central Africa. It also assisted the G5 countries in the Sahel to the tune of $20 million,” Adesina said.

Nialé Kaba, Ivorian minister for planning and development in Côte d’Ivoire and president of the AfDB’s Board of Governors, stressed that the pandemic was, in spite of all, an opportunity to “take up the challenge of the digitization of our economies.” She encouraged the Bank’s management “to provide substantial support to African countries individually and collectively in order to strengthen national and regional digital infrastructure for greater connectivity.”

The highlights of the 2020 sessions are the election of the Bank Group’s president and the statutory meetings of its Governors, which are being held behind closed doors. Expectedly, Adesina would be re-elected later today (Thursday 27 August) unopposed for a second term of five years, after serving an earlier first term. Adesina, the first Nigerian to occupy the position, was elected by the Bank’s Board of Governors for a five-year term on 28 May 2015 at the 50th annual meetings, which took place in Abidjan.

In his opening speech at the AfDB, ADF meetings, the President of Côte d’Ivoire, Alassane Ouattara, highlighted the unusual context of this year’s annual meetings, taking place against the backdrop of the COVID-19 pandemic. He also underscored the Bank’s critical support for his country and other regional members.

“This is an opportunity for me to acknowledge the African Development Bank, its President and Board of Directors, for the unwavering support expressed in these difficult times to African states. Indeed, the Bank’s COVID-19 Rapid Response Facility has made it possible to finance

and support African countries in the fast implementation of plans to fight the pandemic,” Ouattara said.

President Ouattara applauded the “remarkable capacity to adapt that the Bank has shown by continuing its operations and functioning in virtual mode, since March 2020,” and the work accomplished by Bank President, Akinwunmi Adesina “who has successfully led the transformation of the African Development Bank and has given it great credibility and visibility, of which we are proud.” He wished Adesina good luck in his re-election bid.

Adesina also lauded the excellent relationship between the financial institution and Côte d’Ivoire, which is home to the Bank’s headquarters. He also paid tribute to the country’s steady economic progress.