By Dikachi Elemba, in Owerri
The Imo State chapter of the Cocoa and Plantain Farmers Association of Nigeria (CP-FAN) has outlined an ambitious target of having its members plant  and own at least a total number of 10 million cocoa seedlings and ensure that the state becomes  a  leading cultivator and producer of cocoa in  Nigeria. 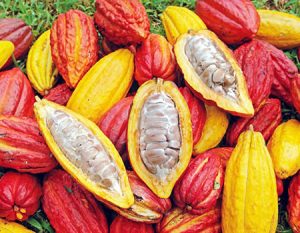 “We have also introduced a project called ‘10 million Cocoa’ through massive planting of cocoa seedlings. Our target is 10 million cocoa trees in Imo State and we intend to achieve this by targeting one million people. Ten out of this will plant and own 10 cocoa seedlings each.

“We are hoping  that the Imo State government  will give us support and we are nursing large cocoa farms.  And when  this is achieved,  Imo State will take its  proper position as a leading  cocoa producing state”, said Ambassador Innocent Dike, chairman of the Imo State Cocoa and Plantain Farmers Association of Nigeria, in an exclusive  interview.
According to Dike,  in 2020 Mohammed  Sabo Nanono, the former minister of agriculture and rural development, in collaboration with the ministry of agriculture brought 7000 improved cocoa seedlings  to Imo State during his official visit and were all distributed to farmers  in the state, where about 300 farmers benefited from the gesture.
Cocoa is the highest selling agricultural commodity because cocoa produce is in high demand globally, “there is no quantity of cocoa you can produce that will satisfy the market and it makes business sense to go into a business that its demand exceeds supply because over one billion people consume cocoa products daily,” he said.
According to him, “it means that there are a lot of job opportunities for youths and women especially  in the cocoa value chain business. The demand for chocolate  is high  because of its health benefits, so we encourage  individuals, government agencies that have land to invest in cocoa  farming.
Dike recalled that the association embarked on sensitisation and campaign  to raise the consciousness  of the people in Imo State about cocoa farming because,  there was  the feeling  that cocoa  could not grow in  Imo but noted that before the  civil war, cocoa,  coconut palm, rubber, were the major  crops in the old Eastern region.
Also, he stated that the association has embarked on organising seminars, trainings, workshops to impact skills on the best cocoa farming practises  to farmers, as well as introduced cocoa rebirth projects,  rehabilitation of cocoa value chain, all aimed at the development of cocoa farms in Imo State.
According to him,  after  raising the  consciousness  of  people in Imo State,  there was  high demand for more seedlings,  and many people  developed more interest in  cocoa farming, not only in Imo State, but in the whole of the South East.
He informed that the Covid-19 pandemic worked in their favour because the cocoa farmers in Imo used the lockdown period to form Cocoa Stakeholders Cooperative Society Limited and from it funds were mobilised to establish cocoa nursery development  farms in four locations in Mbaitoli local government area in the state and more than 100,000 cocoa seedlings were raised,  he added.
However,  the association is facing some challenges and such difficulties include awareness creation, lack of funds because,  according to him,  cocoa farming is an elitist business and capital intensive.
He disclosed that the cocoa farms in the state are old as many of the cocoa trees were planted before the civil war and had  been fruiting  for about 100 years.
Most of these farms, he said,  are located  in the remote  and hinterlands in Oguta local government area,  where roads leading to these farms are inaccessible.  He has, as a result, pleaded with the state government to reconstruct roads leading to the cocoa farms.
Businessamlive Website Stats