In order to contribute meaningfully to the country’s gross domestic product, the Nigerian government has been advised to create a ministry of maritime resources. 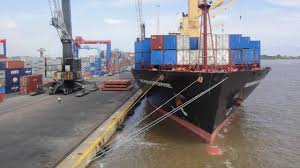 Frontline maritime industry player, Tony Nwabunike, who gave the advice in an exclusive interview with business a.m, noted that the maritime sector also needed to be put under one ministry in order to ensure sanity in the sector, as shipping and maritime in Nigeria is currently regulated by numerous government agencies, with none taking responsibility of developments and the situation leading to insanity in the system.

Despite its highly celebrated potential, the maritime industry has been contributing nothing to Nigeria’s GDP. Cabotage trade in the country is dominated by foreign ships, with very few indigenous ships which remain largely idle, while foreign vessels take oil freight jobs. The country is import-dependent, where all the ships bringing in cargoes and taking a few exports away are all foreign ships.

If Nigeria establishes a ministry of maritime, it would join the league of such countries as India, which has a ministry of shipping, Greece, Portugal and Croatia, among others.These countries remit millions of dollars home and abroad from maritime businesses and seafaring.

The Ministry of Shipping, a branch of the Government of India, is the apex body for formulation and administration of the rules and regulations and laws relating to shipping. Maritime transport is a critical infrastructure for the social and economic development of a country.

Nwabunike said, «We need to reorganise our system, rejig the way and manner government stakeholders in the industry reason, especially where every agency wants to be in charge of the maritime industry. The ministry of finance will tell you they are in control, the ministry of transport will say they own the ports, ministry of health through NAFDAC is also clamouring to control the ports. So, there must be a particular ministry that will supervise all the functions pf these ministries at the port… I am just thinking aloud, so that we have where to channel the problems and draw solutions from.

«Most importantly, the institution to hold responsible to that effect is badly needed. Some countries have a ministry of maritime and I think Nigeria should as well think towards that direction so that we can have sanity in the industry and some sense of responsibility from the ministry in charge.»

«First of all this (maritime) sector needs a total reorientation. It needs a total overhaul. The sector needs government to think out of the box, because, people do say that after oil, the maritime sector should be the second largest revenue generating sector. However, both of us can understand that we need a whole lot of re-organisation in this industry. Our expectations, orientations and attitude to work must come to play, and most importantly, we need to make wise comparisons about whether we are developing or not. For instance, sometimes, we say Customs revenues are increasing and we don’t even know if they are true. Put it in cost effects, when Customs generate N1.3 trillion at exchange rate of 360, compared to N960 billion at the exchange rate of N160 per dollar in 2014.

You find out that that values about same; you find out that nothing has really changed, except that N960 billion in 2014 is actually bigger than N1.3 trillion now,» he said.

He chronicled the events in the maritime industry in 2019 to include «too many things,» which he said happened last year.

According to him, many maritime policy decisions were taken by the federal government and so many guidelines were changed too which made the industry to have a different level of experience «amidst new ideas, new hopes and new dimensions to businesses.»

\«In the area of government policies, we had the government decision to close all land borders in August and this had another impact on freight forwarding and maritime industry. Other policies that affected the maritime industry in addition to border closure and dry ports openings are improvement in the eastern ports. For the first time, the ECM Terminal in Calabar port received containers and some other agencies clamoring to return to the ports. some of them opting to do interwoven jobs with other government agencies and parastatals.

«The border closure had effects on freight forwarders, the economy and on individuals. Also in 2019, the AfCFTA was signed by President Muhammadu Buhari, making Nigeria the last country to sign it after Eritrea.

We have very high level of maritime…Chartered Institute of Transportation by the federal government through the legislative arm of government.We also had NIWA and its new MD coming with his new ideas and some scuffles between NPA and BUA Terminals and OMS. So there are so many developments that shaped the industry last year.

We also saw the Customs closing car shops, telling them to upgrade their tariffs on the imported vehicles and the federal government encouraging local rice farmers to end importation of rice and other food items,» he noted.