The Cross River State government said it has intensified  its commitment towards becoming a leading cocoa producer with the provision of 100,000 cocoa nurseries to help revamp cocoa farms in the southern senatorial district of the state. 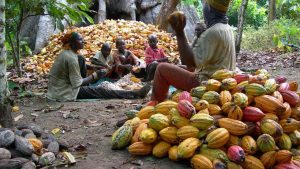 The gesture, according to Ben Ayade, governor of the second largest cocoa producing state, is in line with its ongoing massive cocoa revolution across the state, aimed at making the state one of the leading cocoa producing regions globally.

Speaking during the unveiling of the 100,000 cocoa seedlings being raised at the CRBC demonstration farm in Calabar, Oscar Ofuka, special adviser to the governor on cocoa control and development, said the cocoa nurseries would be given to farmers for free and that with the gesture, moribund crops that had outlived their usefulness would be regenerated, thereby giving such plantations new lease of life.
Ofuka disclosed that the brand of cocoa nursery being raised are organic and would be devoid of chemical usage to nurture the cocoa pods.

He urged young and energetic people of Cross River State to venture into cultivation of cocoa and key into the governor’s cocoa revolution policy, noting that its value chain has numerous wealth creation opportunities to make their lives better.
“The governor, who is my boss, is more emphatic about the complete renovation of cocoa production. Cocoa, which was abandoned decades backwards, when oil was discovered in the country, will become the mainstay of the economy of the state.
“Today, cocoa is the new gold. It is a money-spinning venture which, if many go into, stands the chance of making them become billionaires,” he stated.
He also explained that the  initiative of regenerating old plantations would ensure that  the ultra-modern cocoa processing factory, constructed by the Ben Ayade-led administration, won’t lack the basic raw materials to feed the cocoa factory when it becomes fully operational.
Businessamlive Website Stats