The Nigeria Customs Service (NCS) has denied involvement of its officers in collecting un-receipted payments to allow passage of fairly used vehicles into the country despite the border closure. 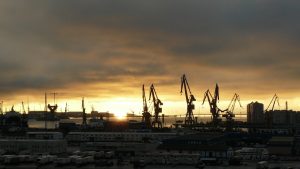 A Twitter user,  Abubakar A Aliyu had alleged in one of his tweets recently that the men and officers of the The Seme Border Customs Command were collecting money from vehicle smugglers to bring in their illicit importations.

The comand in a statement on Wednesday, however, called on the public, especially social media users to do proper investigations before throwing such serious allegations to the media in order not to dampen the morale of officers.

It said, “The attention of Seme Area Command of the Nigeria Customs Service has been drawn to a false narrative targeted to rubbish the Command and Nigeria Customs Service by one Abubakar A Aliyu on his tweeter handle, dated 2nd November, 2019 at about 8:22pm precisely. The statement alleged that officers are collecting money in order to allow passage of fairly used vehicles into the country despite the border drill.

“The command’s preliminary investigation found out that there is no iota of truth on what was alleged. Therefore, the report is not only baseless, but unfounded. However, the command is calling on the public, especially the social media users to do proper investigations before throwing such serious allegations to media in order not to dampen the morale of officers that are working hard in the discharge of their duty,” the command said in a statement by Hussani Onawo, public relations officer.

The command maintained that since the inception of the border drill exercise  on August 20, 2019, it has recorded tremendous achievement in its anti-smuggling operations.

“The command within the period of the excercise intercepted 55 fairly used smuggled vehicles with duty paid values worth millions of naira.

“We equally advised not only the likes of Abubakar A Aliyu, but the public with tangible evidence that can assist the Command to tackle some recalcitrant ones should please come forward for the benefit of all,” Onawo said.

Onawo noted that  the management of the Nigeria Customs Service, had introduced some palliative measures to help those whose vehicles were  impounded and detained, for not paying duties, and are now willing to pay, should approach the nearest federal operations unit to pay their duties.