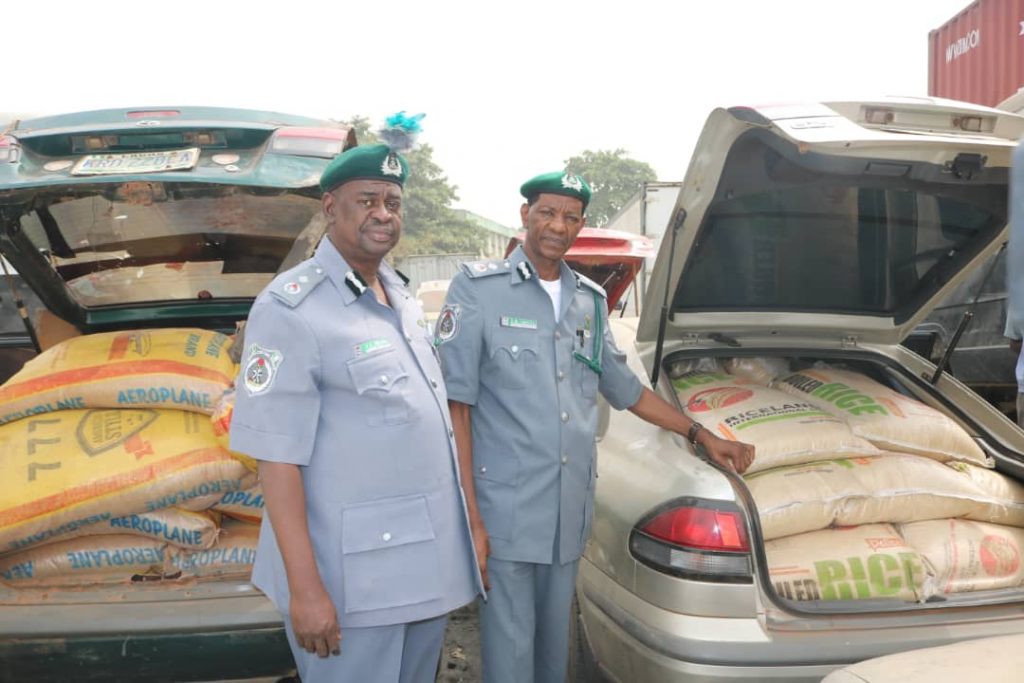 Despite closing her land borders against trade, food smuggling into Nigeria has continued unabated, with dare-devil smugglers becoming more desperate than ever before and moving rice in gas cylinders across the border into Ogun and Lagos.

The Federal Operations Unit Zone A of the Nigeria Customs Service recently smashed a gang of smugglers, seizing 1,393 bags of rice, rice in gas drums, 625 cartons of frozen chicken, 187 jars and 66 drums of vegetable oil among many other items.

Usman Yahaya, acting controller of FOU Zone A, says unrelenting efforts of his men has continued to yield more result in his anti-smuggling drives.

“Barely two weeks after the comptroller-general of Customs’ working visit to Lagos where he showcased various seizures made by FOU A worth over N10 billion, we have again intercepted 1,393 bags of smuggled foreign parboiled rice, 187 jerrycans/66 drums of foreign vegetable oil and 625 cartons of poultry products from unapproved routes within Ogun State between 5th -17th February 2020 based on surveillance and routine patrol,” Yahaya said in a statement.

According to him, the rice, vegetable oil and poultry products were conveyed in 12 different motor vehicles and also concealed in gas cylinders with a cumulative duty paid value of N40.14 million.

“This desperate act by these dare-devil smugglers concealing edible items in a gas cylinder further justifies the hard chase by operatives of Customs. DPV of each type of seized items include rice, N27.86 million; vegetable oil, N6.28 million, and frozen poultry N6 million,” the controller was quoted in the statement by the zone’s spokesman, Jerry Attah.

Yahaya, a deputy comptroller of Customs, warned smugglers to repent from their unscrupulous activities, or continue to count their losses as his unit would continue to be a source of nightmare to the economic saboteurs.

He also advised legitimate traders to be compliant in their declarations as the unit is ever ready to facilitate their trade in line with world best practices.

While thanking Hameed Ali, comptroller general of Customs and the entire management team of the Nigeria Customs Service for providing necessary logistics and motivation that led to this feat, Yahaya called on all meaningful Nigerians to support the service’s fight against smuggling activities by providing intelligence that could assist the unit achieve more monumental seizures.