A recent announcement of seizures of 30 containers of “expired” imported foreign rice at the Tin Can Island Port in Lagos by the Nigeria Customs Service has ruffled the chicken’s feathers and is proving to be one of the biggest controversies in Nigeria’s trade in recent time, as the Nigerian Customs Service and a private firm, Masters Energy are currently at war over seizure of rice imported by the company. 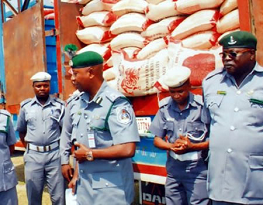 Hameed Ali, comptroller-general of the Customs Service, a retired army colonel was in Lagos Tuesday last week, to display before the media, piles and sections of seized prohibited and smuggled goods which came through the Tin Can Port in a total of 54 containers. The goods included 11 containers of contraband drugs and 33 containers of foreign rice whose expiration dateline showed 2018. The Customs had claimed that the rice, imported by Masters Energy, a firm owned by a serving Nigerian minister, were expired. The Customs boss, Ali had indicated that the closure of the country’s land borders had forced smugglers to the port, which made the port see an influx of smuggled and contraband goods.

But in a swift reaction, Masters Energy faulted the claims by the Customs saying the rice was imported by the company since 2016 three years before the borders were closed. The company maintained that the product was well within shelf life when it was imported in 2016.

The reaction of the Masters Energy appeared to have put the Customs on the spot, as the trade facilitator in a counter reaction, attempted to clarify that out of 33 containers of rice displayed to media on Tuesday, 25 were imported by the firm, but were only discovered recently through profiling. The service said the company was only attempting to save its face, as it is a perpetual offender, having also in 2016 deliberately, wrongly declared 30 containers of rice importations as yeast to avoid paying appropriate duties.

The company queried the rationale behind the Customs decision to display the seized rice only now and linking the importation to border closure in its bid to make cheap points. But the Customs retorted that when goods are imported but not declared, they are not yet brought to Customs attention. According to the company, the rice alleged by the Customs as smuggled and expired was actually legally imported but abandoned at the port after it was caught up by the forex restriction policy of the Central Bank of Nigeria.

Monday Ubani, lawyer to Masters Energy, in a statement said, “There is no single truth in what Hameed Ali was trying to make the whole world to believe in the said press conference. If you Google, you will find out that sometime in 2016 it was widely reported in the news that about 30 containers of rice belonging and imported by Masters Energy Commodity Trading Limited through Nigerian port, Tin Can Island, Apapa was impounded for failure to pay the correct tariff when clearing them by the customs licensed agent.

“It was even reported that Masters Energy then petitioned the House Committee on Customs, Excise and Tariff that its agent, Messrs Destiny Impex Limited, a clearing company registered and licensed by the Customs made a false declaration in order to cut tariffs for the 30 containers of rice. The company indicated willingness to pay the correct tariff as the agent was paid full money but decided to cut down the tariffs in order to avoid paying full value of the tariffs.

“This request was turned down and the company was later informed through anonymous source that the same rice has been shared to the internally displaced people’s homes in the northern part of the country. It is important we point out here that this parboiled rice was purchased from Thailand from a company known as Asia Inter Trade Rice Export Co. Limited with a disclosed address and there is bill of lading to that effect. The quantity imported were 60 containers in all. Thirty containers were seized due to the under declaration by the Agent while the remaining 30 containers arrived later at the port by which time  the federal government has put rice as one of the famous 41 items that will not enjoy forex of the Central Bank of Nigeria.

“Due to this policy as aforementioned, the remaining 30 containers remained uncleared and abandoned. We have letter from Customs authority asking Masters Energy to seek the approval of Central Bank of Nigeria before they can clear the remaining rice. All these events took place in 2016.”

Rice was not declared by importer; we only discovered it recently, says Customs

However, Joseph Attah, public relations officer of the Nigeria Customs Service, admitted the product now immersed in controversy was imported in 2016 but was only discovered in October through profiling. He however stated that until goods come to the attention of the Customs, they cannot be treated as importations. He explained in a statement that it was actually a second batch of rice imported by Masters Energy, the first batch having been legally seized and given to internally displaced people.

He stated, “Yes, 30 containers imported by Masters Energy and falsely declared as yeast were seized in 2016/2017. After judicial process, the rice was forfeited to the Federal Government. The 30 containers of rice were given to the victims of the insurgency in the north-east in line with presidential directive. It should be noted that in these 33, only 25 belong to Masters Energy Limited.

“The discovering of these containers stacked in the terminal came as a result of painstaking profiling of un-utilized Bill of Lading and unclosed manifests which led to the physical discovering of these containers with expired rice. It should be noted that when goods are imported but not declared, they are not yet brought to Customs attention hence cannot exit the port unless the owners succeed in compromising port officials and operatives to smuggle them out. This was not (or could not) be the case here.

“It was therefore the recent stepped up surveillance at all entry and exit points that led to the holistic audit of all manifests and profiling of all un-utilized Bill of Lading that led to this interception. It is obvious that their desperation to save face is hindering understanding of the fact that until an undeclared container is identified, it cannot be intercepted therefore cannot be talked about. Why should it bother the company that Nigeria Customs Service is informing the public about the interception of containers they did not declare? Could it be for the fear of the legal action that will follow the press briefing?”